Okay, back to work

This week is the first official work week of 2015, and I’m happy to report that I did 3,000 words on Deep Water today with a goal of turning it in this month to Evernight. Granted, I have no idea if anything I wrote today is useful, seeing as  the local flora are having enthusiastic sex despite the low temps and my eyes are actively trying to crawl out of my head and hide until all the pollen settles. But hey, that’s life in the clavicle of Texas. Achoo!

I also picked two winners for my Evernight Holiday Hangover Blog Hop Contest — Kaylyn D won an Amazon gift certificate and my Planet Alpha book Assassin, and Kev won my Dougal the merman doll (which works out very well as he’s quite the merman figurine collector). Thanks to everyone who participated in the hop, and best of luck with the grand prize!

As for me, I’m off to start an antihistamine IV. Whee…

I’m visiting blogs, yes I am

My fellow Planet Alpha author Beth D. Carter has me on today to talk about the influences that went into Assassin and how I develop my character dynamics, so if you want to find out why Zhan is the way he is, head over to http://bethdcarter.blogspot.com/2014/10/planet-alpha-author-nicola-cameron.html. 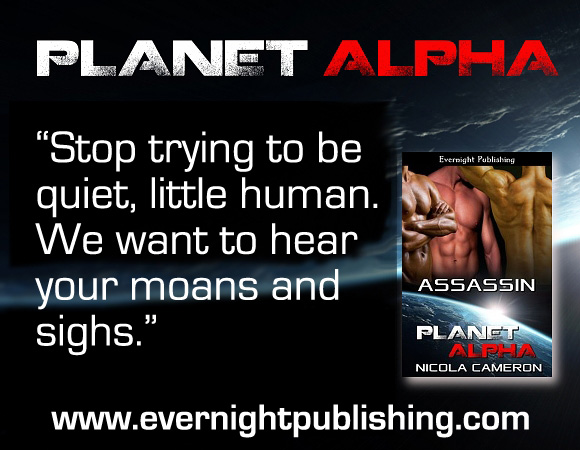 Right now, I’m finishing up my anthology entry for Evernight’s uniform fetish call, and then it’s back to work on Iron Cross. And for tomorrow’s Mid Week tease you’re going to get an exclusive scene from Trickster to celebrate Halloween. Woohoo!

Comments Off on I’m visiting blogs, yes I am

So, Planet Alpha: Assassin is out…

And after a weekend of social media promo and talking it up wherever I could, it’s on the All Romance eBooks Romance Bestseller list (currently #28) and on two category bestseller lists at Amazon, all of which makes me very happy (and people teasing me on FB about selling the movie rights and who could play Taric, Zhan, and Duncan is even more delightful. For the record, my dream cast would be Colby Keller as Taric, Paddy O’Brian as Zhan, and Levi Karter as Duncan. Cockyboys and Men.com, take note).

Of course, the annoying thing about being a writer is that you re-read your newly published works and wish to God that you could have one last crack at editing them. Nothing major, just a sentence here and there that makes you think, “Why did I phrase this so clumsily?” or “Aw, crap, I already used that word in this paragraph.” (Apparently this happens to Neil Gaiman of all people, so I don’t feel that bad about it, but still.)

And the funny thing is, almost no readers will ever comment on these little infelicities, or even notice them. It’s just the writer, that OCD perfectionist who wants his or her story polished to a high gleam before it sees the light of day, who spots the occasional smeary fingerprint and winces at it. So I just need to shut up and enjoy my sales, basically.

Comments Off on So, Planet Alpha: Assassin is out…

So there I was, sitting in my hotel room in London (Ramón and I were attending the World Science Fiction Convention, long story) when I decided to get online and check my email. Lo and behold, an acceptance email for my Planet Alpha story appeared!

The current release date is sometime in October, and the acquiring editor decided that Assassin was an appropriate title in honor of my delightfully sarcastic Xyran assassin Zhan. If you’ve been following my Mid Week Teases for this story, you’ll soon be able to read the whole thing. Here’s the blurb I just submitted with my cover art sheet — can’t wait to see what Sour Cherry Designs comes up with for this one.

A routine wilderness patrol goes horribly wrong when Sergeant Deacon Shea and his patrol partner are ambushed by scavengers. After a firefight leaves his partner dead and their vehicle destroyed, Deacon is forced to hike out of the mountains alone. Stumbling across a grounded Alphan shuttle, he thinks he’s found a ride home with the Alphan warrior Taric and his Xyran associate Zhan. The handsome aliens, however, have other plans for Deacon — to make him their mate.

Forced to hide their bond from their respective governments, Taric and Zhan never expected to find their third bondmate on Earth, and definitely not in the middle of an unauthorized mission to stop a vicious Xyran slavemaster. Neither of them can resist the urge to claim Deacon, but will their new mate help them catch their old foe, or turn them over to Earth — and Alphan — justice?