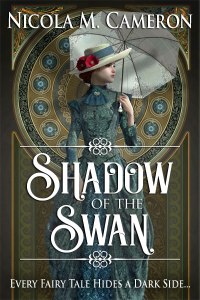 A determined academic, trapped by her ancestor’s pact. A gentleman vampire, sworn to protect her. And a deadly Fae king, bent on claiming her as his bride.

In the golden years of the Victorian Era, Louisa Wallingford investigates myths and legends around the globe with her historian uncle, until her life is torn apart by an ancient promise to a sadistic Fae royal. Faced with becoming his unwilling bride, Louisa’s only escape is another marriage … to a handsome but distant vampire.

Sir Henry Carstairs gave up his humanity to save the queen he loved. When he failed, he vowed to protect her daughter and the country she ruled. Now, his vow requires him to enter an arranged marriage in order to protect a beautiful, headstrong scholar. But as their faux relationship becomes real, a deadly conflict between the British Empire and the Land of Faerie threatens to separate them forever.

Rated Five Stars. “This was a fantastic read that I thoroughly enjoyed. So good to read a Nicola Cameron classic again.”
– Archaeolibrarian

Rated Five Stars. “Louisa and Henry are supported by an amazing cast that I loved getting to know.”
– The Romance Reviews

“Want a high heat Victorian fantasy rec? Have I got a treat for you!“
– Dot & Needle

The evening air was warm on Louisa’s skin as she stepped barefoot through the garden, masses of jasmine and roses giving their perfume to a gentle breeze. Underneath her feet, the paving stones retained enough of the heat of the day to feel pleasant against her soles, the slight roughness of the ancient stones giving her a sense of security. She crossed between two vine-entwined stelae and into a large courtyard with a wide, dark pool at its center. The water was dark, reflecting the first stars that had already come out, and enticed her with its promise of cool relief.

She walked to the edge of the pool and stepped in. It was only ankle-deep at that part, but quickly grew deeper. Soon she was floating, her nightgown slowly rising around her like a cotton halo.

Its clinging weight was distracting, so she slipped the garment over her head and threw it to one side. Unencumbered, she moved into the center of the pool, letting the water buoy her as she swam slowly. Oh, how she’d dreamed of doing just this, going out to the pool in the night when everything was peaceful and swimming back and forth, letting the water wash away the cares of the day. And now she could do it, because…

Of course. She was promised to someone, the hero she had always yearned for, who would fulfill all of her dreams, even the ones she couldn’t admit to herself. And now she was waiting for him to come and claim her as he’d promised.

Yes. It was so simple. He would come to the pool’s edge and hold out his arms, and she would rise from the water’s embrace to one even more wonderful. She could see him standing between the stelae now, a dark shape against the darker greenery of the garden. My king, my promised one. Take me.

No, Louisa. You’re mine.

She shook her head against the whisper, different from the waiting form but just as attractive, as luring. “I have to. He’s come for me.”

As have I. Another form appeared, shadowed against the deep violet of the sky as it stood at the end of the pool where she had entered. A pale shirt flashed like a ghost as it was stripped off and tossed to the side, just as she had discarded her nightgown. The form bent, and she knew he was removing his boots and trousers, depositing them next to the shirt.

She couldn’t see details, much to her disappointment, but knew he was now nude as he stepped into the pool, swimming towards her once he was deep enough with a steady stroke. When he was close enough to touch, a hand cupped her cheek, shockingly cool against the soft heat of the water and the air.

“Louisa.” It was half whisper, half prayer. The hair at the nape of her neck rose up, and her breasts began to ache in the strangest way, even as muscles lower down tightened of their own accord. She sank slightly in the water, her breath trickling out in a shuddered sigh.

When those cool arms slid around her, she raised her face for his kiss. His lips were a balm against the warm air, softening under the bristle of a short mustache as they settled on her own. She had kissed a few young men before, Jayan among them, but none of those brief, messy encounters were like this. It was a new language, a sweet, hungry poetry that spoke to her heart as their lips met, clung, and danced with each other.

He pulled away before she was ready, allowing her to take in a necessary breath, then returned to claim what was already his. This time the very tip of his tongue teased along the seam of her mouth, tickling a bit but also causing those lower muscles to contract again.

It seemed only right to open her mouth. With exquisite delicacy he licked the inside flesh of her upper lip. It was as if a firework had gone off inside her, the feeling was so shockingly good. She pressed against him, searching for more of it. He indulged her, his tongue playing against hers in a kind of dance that made her yearn for more of something she couldn’t name.

His arms were reassuringly strong, and pressed her closely against him now. She could feel the lazy kicking of his legs as he kept both of their heads above water, and the flat, muscular pads of his chest boasted a now-damp fur that tickled her skin deliciously. One of his hands dropped lower, coming to rest on her bottom. He squeezed.

She gasped and giggled at the same time, forcing their lips to part. “What are you doing?”

Touching you. Another squeeze, not hard but as if he appreciated the roundness of her bottom. What luscious curves you have, my dear. He let go, his hand reversing course and easing up between their bodies until the curve of his thumb and forefinger came to rest against the underside of her breast. A beautiful woman in every way.

The words sent a small, secret thrill through her. She had grown so used to thinking of herself as a spinster academic, valued more for her brain and her neat hand than her looks, that being called beautiful was intoxicating. “Kiss me again.”