Beneath Their Own Blue Sea 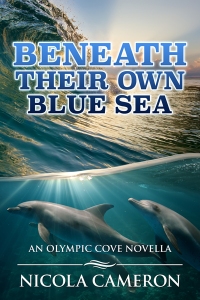 After breaking his engagement to Thetis because of a disturbing prophecy, Poseidon convinces her younger sister Amphitrite to marry him instead (with the help of a sarcastic dolphin). But the wise Nereid has a few requests before they marry…

Excerpt from “Beneath Their Own Blue Sea”

Poseidon, God of the Sea, glared at the shimmering silver net surrounding him. “Well, this is another fine mess you’ve gotten us into,” he said to the dolphin floating at his side.

Delphinus let out an offended squeak. It translated to, “It’s not my fault you plunged in here without looking, lord. I told you that fish was behaving oddly.”

He couldn’t argue with that, which made him even more annoyed. He’d been out for a day of sport with Delphinus, mainly to get his mind off his recent breakup with the Nereid Thetis. The weather was perfect for chasing down the canny fish that thronged the Mediterranean, and after spotting a choice bluefin he had set off in hot pursuit, Delphinus in his wake.

The bluefin had lured them on a merry chase before diving down into a thick knot of seaweed. Poseidon and Delphinus had followed, swimming straight into a small coral grotto thickly carpeted with lichen, seaweed, and sponges. The plant life had cushioned their abrupt stop, but neither god nor dolphin noticed the enchanted net lining the walls until it snapped closed behind them. “You didn’t say it was leading us into a trap.”

“Why yes, this is true,” Delphinus said, rolling his eyes. “I humbly beg your pardon for not having godly senses that are supposed to detect magic nets like this one, lord. I’ll work on that in the future.”

Ignoring the cetacean sarcasm, Poseidon poked the gleaming net. It had only contracted at the entrance to the grotto, giving them more than enough room to move. But the silvery threads wouldn’t tear, no matter how hard he pulled on them. Using the sharp tines of his trident to rip at them had the same result. Whoever had created this cage was a clever being indeed.

And as soon as I get out of it, I’m going to track down that clever being and beat him bloody.

He startled, turning towards the figure that was now hovering just outside the grotto’s entrance. “Amphitrite? What are you doing here?”

“Waiting for you,” the Nereid said, bare feet kicking idly against the sluggish current. She wore a wisp of fabric that clung attractively to her curves, and her eyes were bright in a preternaturally lovely face. “It certainly took you long enough to stumble into my trap. I’m going to have to feed that bluefin for weeks, now.”

Delphinus muttered something uncomplimentary at that, and Poseidon glared at both of them. “Does this have something to do with our engagement?”