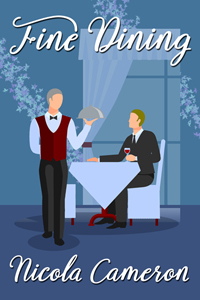 Upscale department story buyer James Fairchild has been a dedicated patron of Bistro LeClerq for two reasons: their superb food, and the attentive service he receives from Gustav, his favorite waiter.

The accident was perfectly timed. Gustav had just lifted the bowl of bouillabaisse from his tray and was about to put it down when the blond broker suddenly jerked backwards in his chair. It bumped Gustav’s hip, causing him to lurch slightly and slop hot soup onto the table and James’s lap.

James gasped in pain as the burning liquid spread over his thigh. He glared at the broker, who just smirked. Score one for me, the expression said.

“Sorry about that,” the broker said nonchalantly, standing up and strolling to the restrooms.

James grimaced, then realized that Gustav’s attention was focused on him. “Monsieur, I’m so sorry!” the waiter said, sounding genuinely horrified. “Are you injured?”

“It caught my leg,” James said through his teeth. Damn it, now he would have to go home and change, and he still had to finish his précis on the new menswear line before flying to Tokyo on Thursday—

“We must see to it immediately. Come with me.”

“I—what?” James found himself levered out of the chair and being half-guided, half-towed by Gustav through the bistro to the back and through a door marked “Employees Only”. Beyond it was a short corridor with one side taken up by a row of beige metal lockers, a bulletin board covered with notices, and assorted restaurant detritus.

Gustav opened a door facing the lockers and ushered James through into what appeared to be the manager’s office. Despite the stinging pain in his thigh, James was fascinated by this glimpse behind the debonair curtain of Bistro LeClerq’s dining area.

Gustav had changed as well, the polite attentiveness replaced by a vibrating energy that James finally recognized as anger. The waiter pulled out an office chair from behind the desk, planting it in front of him. “Please take off your trousers and sit down,” he ordered.

James gaped at him. “I beg your pardon?”

“Your trousers, take them off,” Gustav repeated. “I’ll have someone treat the stain, and I will bring something for the burn.”

Take his trousers off. In front of Gustav, the object of his most ardent desire for the last three years. “Um.” James’s hands hovered over his belt buckle, clenching to hide the sudden tremble. “Would you—I mean—”

Gustav’s expression changed, lit by a flash of understanding. “Mais oui, you require privacy. My apologies, monsieur.” With a stiff jerk of his head, he nodded and left.

Oh, God. He doesn’t think I’m angry with him, does he? James’s stomach dropped with the sudden fear that Gustav might be fired for the mishap. No, I won’t allow it. I’ll speak to the manager, tell him it was that damned broker’s fault. Granted, he’d never actually met the restaurant manager, but surely the man was an individual of intelligence and good sense when it came to unpleasant customers.

Determined now, James undid his belt and fly and dropped his trousers. A reddish patch had spread across his right thigh, burning as the cool air hit it, but that appeared to be the extent of the damage. He realized Gustav had managed to direct the bulk of the splashed soup onto the table, avoiding his groin.

Thank you, my dear man. He stepped out of the stained clothing, pulling out his belt and wallet as a sharp rap sounded at the door. On instinct he dropped into the chair, modestly covering his briefs with the wadded trousers. “Come in,” he called.

Gustav peered around the door, holding up a large soup bowl with a white cloth draped over it. “Ah, good,” he said, bustling over. “Once again, monsieur, I apologize for this. Luckily Marco is an expert at treating stains before they set, and of course I will pay for your dry cleaning.”

“Absolutely not,” James said, indignant. “It wasn’t your fault. That boor bumped you on purpose.”

Gustav snorted in agreement. “Nonetheless, I insist,” he said, putting the bowl down on the desk before gently prying the trousers from James’s hands. He held them up, studying at the stain. “Quel salaud,” he muttered.

A Paris veteran, James was fluent in French and recognized the phrase. “Calling him a bastard is probably an insult to bastards.”

Gustav smirked. “Yes, I suppose. But it will be the last time that connard and his friends eat here. Un moment, s’il vous plaît.”

He opened the door, handing the trousers off to someone outside with murmured instructions, then came back in. “Now for you, monsieur.”

“I—” James choked slightly as Gustav gracefully knelt in front of him, taking the bowl of ice water from the desk and putting it on the floor. The choke turned into a gasp as the waiter slid two somewhat chilly hands between his knees and gently nudged them apart.