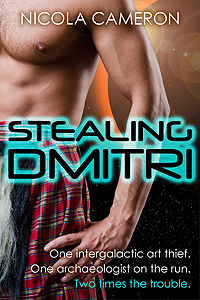 Rated Four Stars. “This was a great read.”
– The To Be Read Pile

Rated Five Stars. “Reading “Two To Tango” was the most pleasant surprise I’ve had in ages. I’ve read a few stories from Nicola Cameron, so I expected to like this one, but I was completely unprepared by how much I FREAKING LOVED it!!”
– Cocktails and Books

Dmitri turned over, glancing down the line of their bodies. Rory’s erection was very obvious in his kilt, almost comically so. The other man must have been contorting himself to keep it off his ass. Of course, now that he was face up, his own erection started filling out nicely.

Rory started massaging his shoulders and arms, going nowhere near his nipples or other erogenous zones. Finally, he couldn’t stand it anymore. “Um, you’re hard.”

“Kind of difficult to do that when it’s right over my stomach. Besides, so am I.”

Rory gave a half shrug. “Totally normal. Lots of guys get an erection during a massage. Don’t worry, it’s not like I’m going to make a move on you or anything.”

He didn’t understand why that admission annoyed him, but it did. “Of course not,” he muttered. “Why would you?”

Rory stopped at that, frowning. “What’s that supposed to mean?”

“I don’t know.” He turned his head, staring at the bulkhead. “Never mind.”

“Hey.” Long fingers cupped his chin, urging it back. “I’m not making a move on you because I don’t believe in hitting on someone when they don’t have a way out of the situation. I mean, yes, I think you’re incredibly hot, which should be obvious by the fact that my cock can now cut diamond.” Rory glanced down at his crotch and grinned. “But that’s my problem, not yours.”

That’s what you think. Dmitri could feel Rory’s body heat moving through him, lighting up nerve endings. He’d been sure that his life would be one long, slow slog through museum workshops, getting older and more bitter with each passing year until he was shunted off to some sterile senior station to die.

Instead, he had been kidnapped during a heist by the Known Worlds’ sexiest antiquities thief, rescued from CAPOD by said thief, been given the chance to restore a shattered Saolao ceremonial bowl, and now had the same sexy thief kneeling over him with a rock-hard erection after giving him the best massage of his life. Except he’s backing off like I’m a nervous virgin.

It was time to take matters into his own hands, quite literally. He cupped his palms over Rory’s exposed knees, feeling the other man twitch from the unexpected contact. “What if I said yes?”

“What.” Dmitri slowly ran his fingertips under the tartan, up Rory’s thighs. “If I.” He pressed the heels of his hands against the soft prickle of hair and the lean muscle underneath, continuing his upward slide. “Said yes?” His fingers reached the top of each thigh, dancing over the crease where leg met groin. The skin was smooth there, but he could just feel the beginnings of crisp pubic hair brushing his thumbs, and the heat from what had to be an aching cock.

He wouldn’t let himself touch it. Not until he was sure they both wanted this. “Or do I have to spell it out for you?”

“Nooo, I think I’m catching on.” Eyes gleaming, Rory leaned over and kissed him. “Is this all right?” he whispered, each word the softest puff of breath against Dmitri’s lips.

“Good. Because if you don’t put your hand around my cock in the next thirty seconds, my head is going to explode.”

Dmitri couldn’t help chuckling. “Well, we can’t have that, can we?”