News about Breaker Zone and Empress of Storms

As of tonight, Breaker Zone is in the lead for Book of the Year at The TBR Pile (if you haven’t voted yet, there’s still time). For it to win 2015 Book of the Year would be utterly awesome, and I want to send a HUGE thank you to everyone who voted for it — you people rock so hard, you make AC/DC look like a garage band.

Now, switching gears: according to the three online vendors to which I have reporting access, Empress of Storms has earned back 100% of production costs and 95% of promotion costs (in less than two months, to boot). If I sell three copies tomorrow, it’s in the clear and everything after that goes into savings for RT in April.

So another thank you goes out to EVERYONE who’s bought a copy, left reviews, or asked me when the sequel is coming out (right now, that looks like summer 2016. I’m still noodling about the title, but remember that clever and dangerous prince from Illium that Flavia was pushing as a possible husband? He’s going to show up in Hellas with his sarcastic manservant and throw himself on Danaë’s mercy after one of his older brothers drops dead. Meanwhile, the Pauwels are continuing to make life difficult for Matthias, mainly by trying to get him to declare Luna as his heir since Danaë isn’t pregnant yet. And hijinks ensue!).

And of course I need to work on Cross Current (Olympic Cove 4), and there’s the Trickster sequel to finish, and I really want to do another story with Rory and Dmitri, and I wouldn’t mind doing a Bully Boys novel either.

But all that will happen in 2016. For now, you are all in the will, and I adore you to bitty pieces. MWAH!

Comments Off on News about Breaker Zone and Empress of Storms

Breaker Zone up for Book of the Year at The TBR Pile! 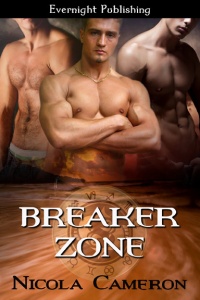 Calling all Breaker Zone fans! I just found out that book Two in the Olympic Cove series is up for Book of the Year over at The TBR Pile!

This is where you come in — I need you to go and vote for me. No registration is required, just a click of your mouse button. (Plus you would earn my undying gratitude by voting for me because the second half of this year has been sort of crap on the personal front and wining Book of the Year would do wonders for my peace of mind). So please go and vote for Breaker Zone, and I thank you for your support!

P.S. Empress of Storms has now paid off 100% of its production costs and 70% of its promotion costs. I may well break even before the end of the year — woohoo!