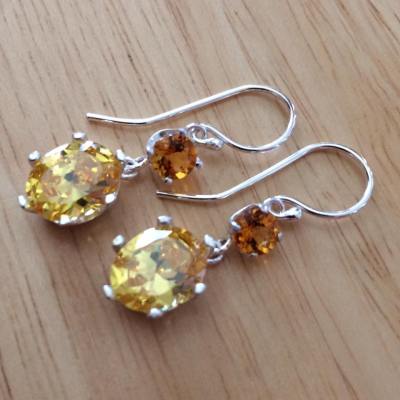 Time on Treadmill: 30 minutes.
Weariness level: Wake me up after Election Day, November 2020

So, stress. Is it possible to be really exhausted from a panic attack and want to just go to bed and sleep?

Turns out the answer is yes. What am I stressed about, you ask? The usual — finances, work, the hellscape that is US politics, the oncoming destruction of the biosphere, the fact that my right foot is still aching, yadda yadda. Which means it wasn’t a panic attack, it was an anxiety attack because there was a definite trigger.

Still, I feel wrecked, I already took a nap this afternoon, and I need to go to bed early tonight because I’m pretty much useless at the moment. Ramón offered to go out and get a pizza for dinner, so I thought I’d try to put together my sister’s citrine earrings while the pizza was cooking. This was clearly a mistake. Number one, the garage is still broiling hot even with a fan blowing on me. Number two, I managed to crack one oval setting (not the stone, the setting), then melted the connector jump rings off the other one. The second one is fixable, but I’m not doing it now because it’ll probably blow up in my face.

I also may have yelled at Ramón to leave me alone after I screamed “MOTHERFUCKER” and he poked his head in to see what was wrong. I apologized profusely afterwards and he told me not to worry about it, he knows that “MOTHERFUCKER” just means I’m stressed and I’ll scream his name if something’s seriously wrong. I do love him.

In any case, the one earring that I managed to set looks lovely. Now I just have to put the other setting together and keep it together, and maybe I can set the stones in that one as well.

Posted on August 20, 2019, in Let's Get Healthy. Bookmark the permalink. Comments Off on Let’s Get Healthy: Day Sixty-one (AKA Ouch) #romancefit.