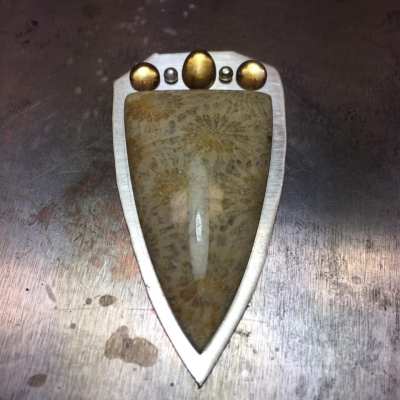 I wish I could say the sweat was from treadmilling (yes, I got thirty minutes in), or lifting weights, or doing some sort of healthy exercise. But it’s mainly from working in a hot garage while I added to the heat with butane and propane torches.

Yeah, I’m making jewelry. The pendant shown at left, to be specific (although I decided against the silver balls, as they made the top look crowded once the bezels had been soldered on) — fossilized yellow coral set with citrines on an 18 GA sterling silver backplate. After getting everything cleaned up and polished, I put it in the tumbler where it’ll be burnished by steel shot overnight (seriously, this works great. I add about a pound of different shapes of steel shot to water, a cupful of burnishing compound and a couple of drops of Dawn dish detergent, then pop in whatever needs to be burnished, and it comes out gleaming the next morning.

And I hear you saying, “Well, that’s nice, Nic, but did you do any, you know, writing today?” As a matter of fact I did, on both King of Blades (up to 10K and three chapters now) and the holiday novella One Sweet Christmas. Depending on how much work I get done in the next two weeks I may have to bump Blades to an August release, which wouldn’t necessarily be a bad thing since it could get included in a NYT list of indie releases in August – October if I do that. We’ll have to see.

Posted on July 2, 2019, in Let's Get Healthy. Bookmark the permalink. Comments Off on Let’s Get Healthy: Day Fifteen (AKA Sweaty Betty) #romancefit.