Let’s Get Healthy: Day Seven (AKA Babes With Blades) 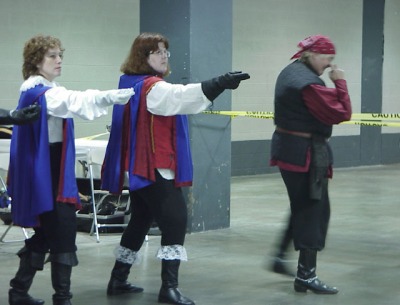 When I was a kid, I loved stormy weather. It was great to hang out in a window and watch lightning bolts chase each other across a bruise-purple sky.

These days, I still love the aesthetics, but what wet weather does to my joints is extremely unpleasant and goes to show that growing old isn’t for the weak. Nonetheless, my aching body got on board the treadmill three times and churned out the necessary mileage. Why? Because damn it, I want my endurance back. Plus I figure the pain will subside eventually after my body realizes that no, this isn’t a passing phase and it had better get used to it.

Actually, what I’d really like to get back to is what I was doing in this picture (I’m in the middle). I used to fence with the SFWA Musketeers at SF conventions, as well as with a group of SCA folks here in the clavicle of Texas, and that was an absolute blast. During this time I was also bellydancing, and I think that was the most fit I’ve ever been as an adult. Not to mention flexible — I can still do really good belly rolls and snake arms when my joints play ball.

Wonder if Romancelandia needs a roving band of babes with blades…

Posted on June 25, 2019, in Let's Get Healthy. Bookmark the permalink. Comments Off on Let’s Get Healthy: Day Seven (AKA Babes With Blades).