Hi, and thank you for hosting me on your blog!

When asked what inspires me to write books, I usually say it’s something I’ve seen or heard, or I’ve been challenged to dig deeply into my imagination and come up with a crazy idea. This time, it was a premade cover. The moment I saw this dark, sensual, slightly homo erotic image of a half-naked man in a fur coat on an exquisitely colored background, I knew it had to be mine. I decided in which historical period to set the story – the obscure, mythical age of the Vikings – and the ensuing process plunged me into an exciting and not so foreign world where everyday heroes lived the same dramas and battled for the same values and desires as we do in modern society. I hope you enjoy the read! 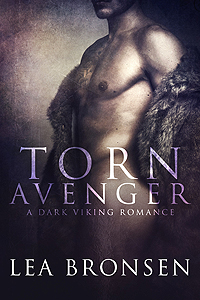 As the second son of a Viking earl, Alv Gunnulfsen wasn’t meant to inherit a throne or avenge a murder. But when his brother is slain during a raid and their father dies of grief, Alv is expected to take command and claim the killer’s death. In a world of ruthless retaliation and strict social codes, he must also maneuver cleverly to protect a troublesome secret: his attraction for men.

Roeland van Dijk, a wealthy Dutch merchant settled in Norway, has done the unthinkable to protect his family — hacked off the head of a Viking rapist. The wrath of the blond savages will cost him his freedom, and possibly his own head… Unless he’s willing to accept the love of another man.

Oh, Roeland attracted him on several levels—mental, emotional, and physical—and Alv longed to discover and develop more of everything with him. Hedin was an exciting lover, but nothing like what Roeland had the potential to be.

Speaking of Hedin, it’d been a surprise to see him again this morning, right after Elke left. He’d arrived in a terrible mood and refused to excuse his disappearance act. It was outrageous of a slave to come and go like that, but Alv had too much on his mind to think of punishing him.

For one, he worried about Roeland’s future. He’d inherited part of Father’s wealth, but not his title. After returning to Eðni, he’d claimed to be the only one who could decide of what to do with his brother’s murderer, but it wasn’t true. He had no standing, no support from his fellow citizens. They could choose to kill Roeland if they wanted to—all it took was a word from Mother. It made her idea to have Alv marry Elke and adopt the community’s natural heir that much more important to push through.

“There’s something we need to talk about,” he said, hoping Roeland wouldn’t oppose to the plan.

“Normally, I would ask you, but since you’re not in a position to make decisions, I’m just going to tell you.”

“About what?” Roeland frowned.

Roeland stood so fast in the basin, water splashed to all sides. He stepped out and leaned into Alv’s face. “Don’t you dare to touch her!”

By Thor, he was insanely sexy, standing naked and wet, so near Alv could feel his damp bodily heat, water drippling from his hair and rolling alongside his tanned, chiseled cheeks. Alv couldn’t help hardening more, and needed to focus on the words that came out of Roeland’s luscious mouth to be able to answer. “She has already accepted.”

Add it to your shelf on Goodreads