My goodness, I haven’t posted anything since before RT, have I? Bad romance writer, NO new MacBook Pro!

No, seriously, no new MacBook Pro. I was going to buy one this weekend with my royalties because my existing laptop is 1) over eight years old and 2) was a refurb when I bought it, but as it turns out I need to use my income for other writing-related expenses — namely, a cover (more about that later), sponsorship and attendance for Wild Wicked Weekend, and to pay off my half of an upcoming trip.

So the new laptop will have to wait another month. Which sort of sucks, but that’s adulting for you.

Anyway, back to RT — I decided to drive from Dallas to Vegas instead of flying because I was in the mood for a roadtrip (and er, I had a lot of shit to bring). Said road trip was gorgeous, and I learned that it is geographically noticeable when you cross from Texas into New Mexico and New Mexico into Arizona. At the TX/NM border the landscape immediately changes from flat plains to gorgeously colored mesas, and at the NM/AZ border it immediately turns into scrubby desert with the occasional mountain until you get to Flagstaff, at which point you’re definitely in the mountains. Lovely, and I’d like to do it again with Ramón if possible.

Vegas itself is the neon-lit adult funland that it’s always been, so no real news there. The Rio was perfectly serviceable as a hotel, although I did hear that the route from the hotel rooms to the conference area was referred to as “the Hallway of Doom” due to its distance. Let’s just say that I hit 10K steps on four different days and leave it at that. Much fun was had with the lovely LD Blakeley as my roommate, and we attended some nifty panels, hung out with great folks like Kenna Nauenberg and Alex Gordon, and of course attended the amazing Cirque du Punk party on Friday night. 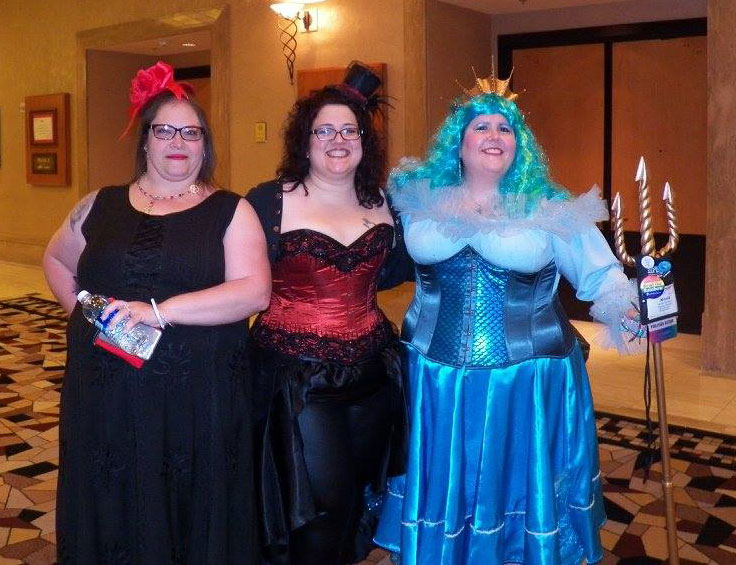 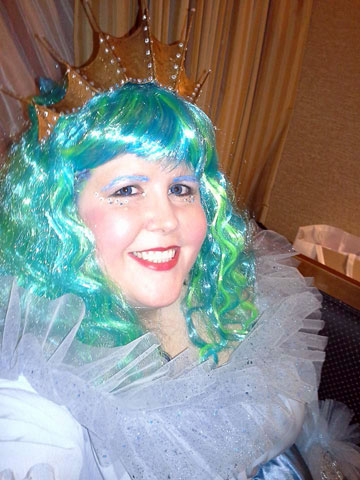 Lady Amphitrite before the nails and corset went on, because those were saved for last, you betcha. 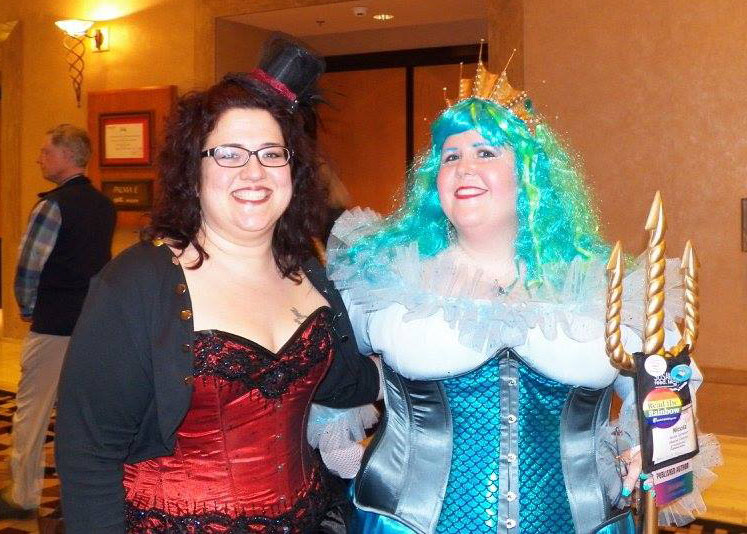 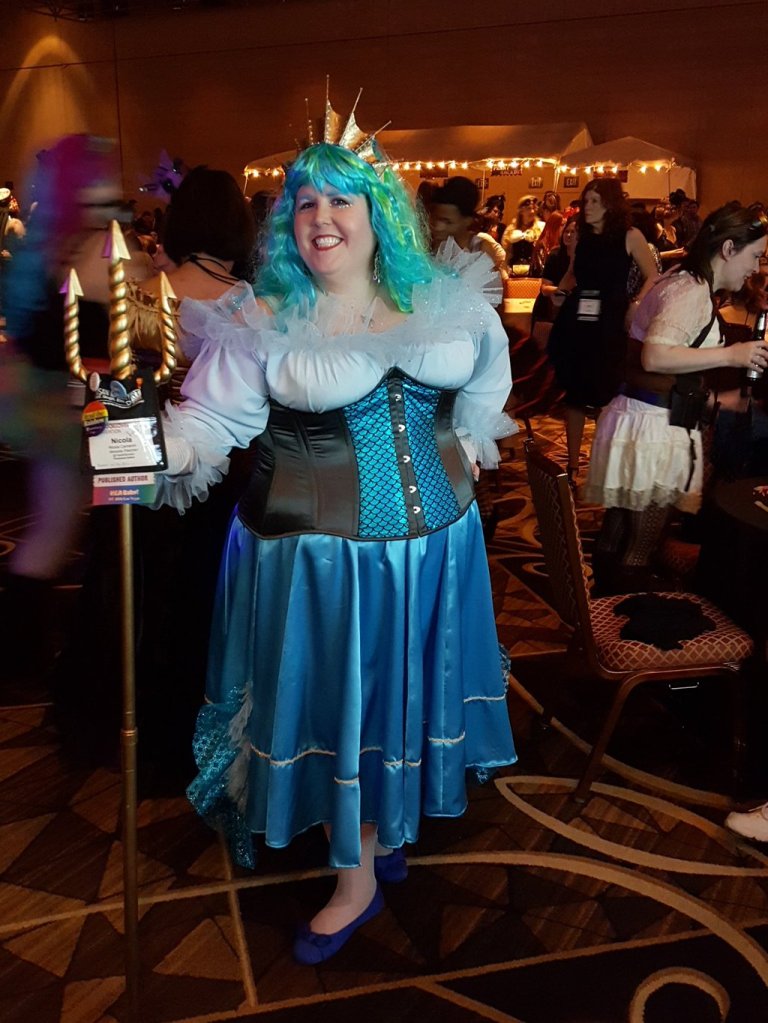 Competing in the CdP costume contest (picture courtesy of Michael Patrick Gleason). I cannot adequately express how much I love this costume.

The other big event of RT for me was the Book Fair on Saturday. I didn’t sell a lot, but I did get to see sights like this: 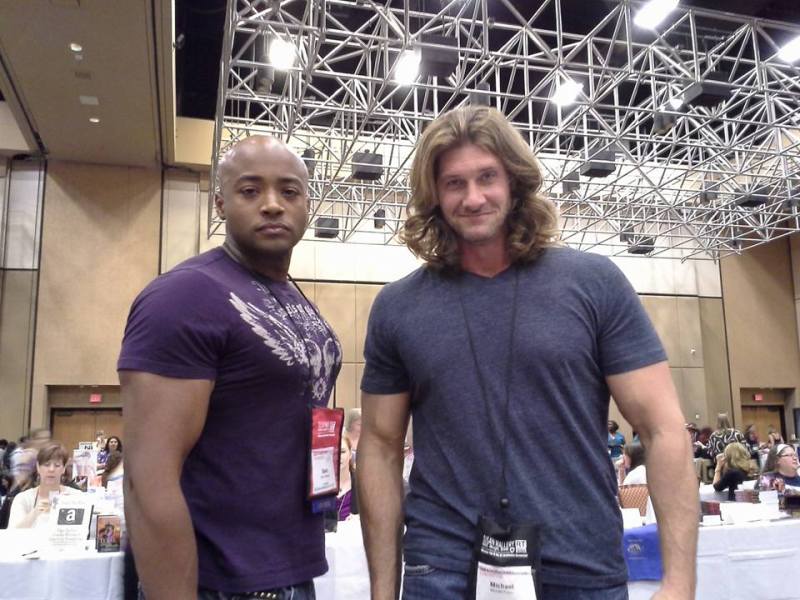 My life is so hard.

Sunday was spent tidying up, trying to get everything packed (or in LD’s case cursing UPS for their extortionate charges to ship stuff to Canada), and hanging out with fellow Evernight author Khloe Wren and awesome cover model Michael Gleason: 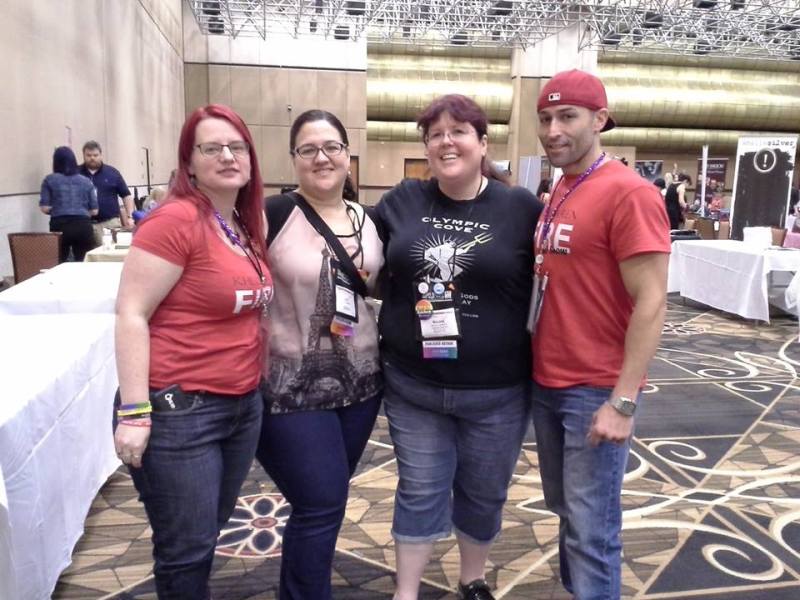 After this LD and I looked at each other, said, “Let’s get out of the hotel for a bit,” and went for a cruise up and down the Las Vegas strip during which we spotted many crimes against good taste, what we suspect is a genuine murder hotel, and a gigantic and truly scary gift shop.

The next day I dropped LD off at the airport and headed home (including a white-knuckle drive during a severe thunderstorm in the Texas Panhandle) to get back to work on all the WIPs I need to finish toot sweet. I also tried to finish a short story for Evernight’s Dark Captive anthology, but the damn thing blew up on me and turned into a short novel. So, um, yeah, look for Do No Harm this summer from Belaurient Press!

In other publishing news, I sold the German language translation of Trickster to Me and the Muse Publishing in Germany, I’m currently waiting on a decision from Juno Publishing in France as to whether they want to publish Empress of Storms in French, and a very good friend of mine will be releasing a hot and hilarious new M/M erotic novelette on Tuesday which I will be helping out with on promo (trust me, you want to read this). The current work queue includes (counts on fingers) Cross Current (Olympic Cove #4), Behind the Iron Cross, Prince of Scoundrels (Two Thrones #2), Do No Harm, and Trickster: All In. That should be enough to keep me going for a couple of months, don’t you think?

Comments Off on And She Returns…

Tags: 2016, Behind the Iron Cross, Cross Current, Do No Harm, Juno Publishing, Me and the Muse Publishing, nicola cameron, Olympic Cove, Prince of Scoundrels, RT 2016, trickster: all in, WIPs

And The Corset Training Begins 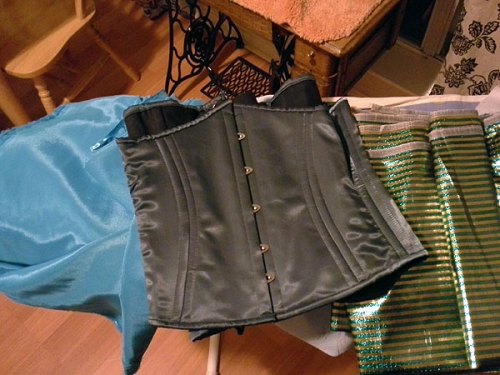 So my lovely steel-boned corset from Orchard Corset arrived today, and I may have been squealing like a 6-year-old because, while I intend to cover it in a temporary skin of hologrammatic turquoise fish scales for costume purposes, it wound up going damn well with my costume color scheme as is. According to the website it’s grey, but it looks dark teal when put next to the costume fabrics, which is perfect for my needs. I was going to leave it in the scale skin for future costume events, but it’s just so pretty I may take it off so that I can wear it to other things.

Then again, I may not have to. Did I mention that corsets happen to be one of Ramón’s fetishes? When he found out he was going to have to lace me up daily so that the corset would be seasoned before RT2016, his eyes lit up like a kid on Christmas morning. If I play my cards right, I may get some more of these in different colors over the coming months, tra la.

So anyway, we put it on. First off, I was absolutely delighted that it did indeed fit my heroically sized frame and that the modesty panel in back covered everything but an inch-wide gap. I’m not worried about that since it will be closed once the corset is properly seasoned. 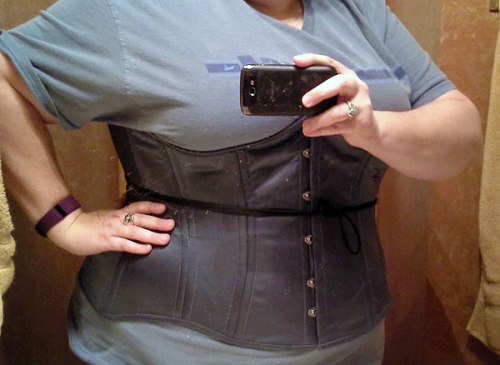 (An aside — seasoning, or breaking in, a new steel bone corset is important because it allows the corset time to adjust to the shape of your body, reducing the chances of popped stitches or warped busks, and it also allows your body to adjust to the idea of compression. Satin corsets like these should be worn for a few hours each day for a week, while cotton or brocade corsets can take two weeks. For more information on seasoning, here’s a useful video from Orchard Corset.)

Secondly, I discovered that I need to pull this down just a tad because the waist is sitting a little high, which shoves my boobs up right under my chin. That being said, I was extremely impressed at how comfortable it was to wear. I could breathe, I wasn’t being uncomfortably pinched anywhere, and man did my posture improve. Also, I got one hell of a kiss from Ramón after he finished lacing me up.

Thirdly, I need to make sure I wipe all the dust off my mirrors before taking future pictures. That’s a NASA t-shirt under the corset, by the way. Gotta make sure my geek cred is current.

Comments Off on And The Corset Training Begins