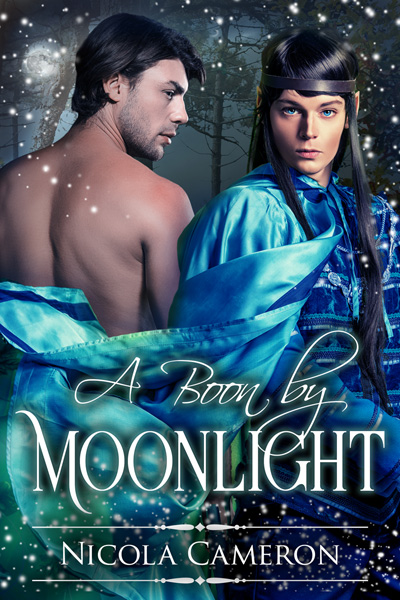 Woohoo, I’m kicking off 2019 with a double re-release! My first publications in January will be two novelettes I originally wrote for Evernight Publishing back in 2013; the rights reverted back to me in 2018, and I’m currently in the process of re-editing them and putting them together for release with Belaurient Press.

The first story, A Boon by Moonlight, is my “boy meets Sidhe/boy asks Sidhe for boon/Sidhe asks for night in boy’s bed” piece. This one has a special place in my heart because I dearly want to go out drinking with these two (Zach could be our designated driver, and Jerrek would throw back vodka like it was water and provide running snarky commentary on everyone else in the bar. It would be great). The re-release will also include the unpublished short story “Snow Day” featuring Zach and Jerrek housebound antics during a polar vortex, so there’s some added value there. It should be out on 1/15 so if you’ve never read this one before you can pick it up then.

And may I just say that I’m freaking in love with this new cover? It screams M/M fantasy romance to me (I still can’t believe I’m writing fantasy romance, but my God it’s fun). Finding the stock image of the model in fantasy garb was a real gift, and the other model works with him extremely well. I may do a couple more tweaks to the image before release day, but what you see here is primarily the finished product.

Oh, funny but true story about the cover — I sent it to a couple of writer friends for feedback. One of them writes SF/fantasy and said, “This is for a fantasy romance story? Because the woman on the right looks like a Vulcan.” I had to explain about Jerrek, after which she said, “Ohhh. In that case, it looks great.” *grin*

The other re-release is Grading the Curve, my “hot for teacher” novelette. Whereas I can get Boon out next week, Curve won’t be out for another two weeks because 1) hoo boy, I learned a lot about characterization and backstory in the last five years, which means 2) this 13K novelette is about to become a 30K novella as I gleefully apply both the Editorial Machete and the Storytelling Spackling Knife with a freaking vengeance (seriously, I re-read the original MSS and was deeply grateful that it sank without a trace. It’s not horrible, mind you, but it was clear I had no idea how to write a good, solid MF romance at that time).

Oh, God. I’m going to have to set up a totally separate website/social media presence at some point for Natasha, aren’t I? I need a drink…

Meanwhile I’m also working on King of Blades (Two Thrones 4) and Natasha’s next romcom, tentatively titled Screen Kiss, so those should be out in March or so. So many books to write, so little time…