TGIF! Let’s kick off the weekend with Gale Stanley’s scorching new romance Off-Limits, now available from Siren Publishing and other purveyors of fine online fiction. Take it away, Suzy!

When Quinn Hart’s best friend died, he became guardian to the man’s ten-year-old son, Noah Stone. So far, Quinn has been able to conceal the growing attraction he feels for Noah, but now Noah is twenty-two and returning home from college. Honor still holds Quinn back from revealing his true feelings. Their community of bear shifters consider reproduction a priority, and Quinn fears they would never accept a homosexual relationship.

Noah has always hidden his romantic feelings for his guardian, but now he’s a man, and his desire is stronger than ever. Unable to handle his feelings, Noah leaves Oregon for a position in a research facility. But when Noah arrives in New York, he discovers his employer is harvesting bear bile and he’s the new source.

Quinn is determined to find Noah. But can he admit what he really wants before it’s too late?

Home. Noah had forgotten how much he missed the endless expanse of lush green landscape and the sparkling river. And the trees. Especially the trees. When the leaves whispered in the wind, it made Noah’s heart ache. Whoever had named their small town knew that trees were sanctuaries.

But for all that, home wasn’t a place, it was a person—Quinn. Noah could live anywhere with Quinn. But a life with Quinn was as likely as a sharknado ripping through Sanctuary.

Noah moved away from the window and gazed at his reflection. The mirror was wall mounted and speckled in places. The frame matched the wood dresser beneath it. A handknitted brown and tan spread covered the crude pine bed. The room had been decorated on a meager budget, but it was warm and comforting because Quinn had handcrafted all the furniture himself.

Noah’s bedroom hadn’t changed since he was a kid. Yesterday, when he’d first stepped through the door, he’d felt the walls close in on him. As a kid, this room seemed huge, but now that he was a man, he could see how small it really was. It felt surreal like turning back the clock, but not in a bad way. If only he could—

“Where’s the man of the hour?”

The sound of loud voices traveled up the stairs. More guests had arrived for the party. The community was small, but when everyone attended an event, it could be overwhelming. Noah checked his image in the mirror again. He’d already changed shirts several times, and he still wasn’t sure that he liked the blue chambray shirt he’d put on with his khakis. Why am I making such a big deal out of this? He felt like Marcus primping for one of those stupid frat parties. What difference did it make what color shirt he wore? Stop stalling, he told himself. You can’t stay in your room forever.

Noah stood at the top of the stairs. Below, friends and neighbors were chatting excitedly. Noah had nothing to say to them. He would disappoint them. Anxiety made his stomach churn.

Gale Stanley grew up in Philadelphia PA. She was the kid who always had her nose in a book, her head in the clouds, and her hands on a pad and pencil. 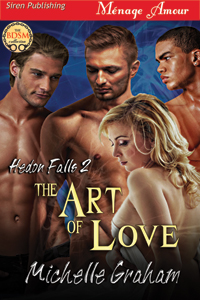 Three men, each with their own distinct talents, and she falls hard and fast for all of them.

When David finds out she is seeing other men, he is hurt and angry. Confused by her attraction to three men, she doesn’t know who to choose. Justin and Garrett show her the joys of sharing and she thinks that may be the key to her dilemma. Can she convince David to consider a ménage?

Melanie watched as he stroked the nipple of the statue, flicking the tip with his thumb and then pinching it between his thumb and forefinger. Watching him fondle the statue was incredibly erotic, and she found herself imagining his hands on her breasts, squeezing, pinching, and pulling at her nipples, which were now incredibly hard. Her breathing was speeding up and her heart was beating faster as she became more aroused. He watched her quietly as he worked his hand over the statue’s stomach and around to caress its ass. Melanie gave a slight moan as she squeezed her thighs together in an attempt to appease her throbbing clit. David’s smile grew larger.

“Would you like to see something else?” David asked her.

“I…” Melanie couldn’t speak. The rushing had returned to her ears and she had a tingling sensation all over her body. She shifted slightly and felt her back arch as she remembered Justin touching her there yesterday.

“Does it arouse you?” he asked, moving closer still.

“Do you want me to touch you like that?”

Melanie closed her eyes, swallowed, and made a decision. “Yes.”

David was standing directly in front of her now, and the heat between them was incredible. She stood still and looked into his eyes as he reached up with both hands. He lightly cupped her breasts, and a sigh escaped her. This was what she wanted. He gently stroked the sides of her tits, the bottoms, all around, getting closer to the nipples but not quite touching. He brought his fingers almost to the tight, aching peaks but would then move them away to stroke the sides some more. Melanie groaned in frustration as he teased her again and again, always coming close but not quite touching the spot she needed him to. When she could stand it no more, she reached up and grabbed his hands, pressing them firmly against her breasts and squeezing them over her flesh. He moaned and at last began rubbing his thumbs across her rigid nipples.

“God!” Melanie cried out. “Yes!” Sensations ripped through her body from the pressure of David’s fingers on her tits. It was amazing, but she wanted to feel those hands against her bare flesh. She pushed his hands away and quickly pulled the sweater up and over her head. As she lifted her arms, David deftly released the front clasp on her bra and her boobs popped out into his waiting hands, which he used to continue his sensuous stroking. She looked up into his eyes, dark with desire.

“Kiss me,” she whispered.

He bent his head down and slanted his mouth over hers, those beautiful full lips coaxing hers apart. She had to taste him, and she darted her tongue quickly into his mouth. He captured it between his lips and sucked on it, causing her to moan into his mouth. He released her tongue and kissed her again, and this time it was she who pulled his tongue between her lips. They took turns sucking and tasting each other, and all the while David kneaded and pinched gently at her breasts.

Melanie wanted more. She tugged his T-shirt out of his waistband and slipped her hands underneath it, running them up the smooth, hard skin of his chest. When her fingers grazed his nipples, she pulled them between her fingers, pinching and rolling them, mirroring his actions on her body. He groaned as she teased him, his mouth becoming more insistent over hers. He slid his hands around to her back and she arched against him. One hand slid into her jeans and cupped her ass, the squeezing rhythm alternating with that on her breasts. David lowered his hand to the button on the front of her jeans and unbuttoned it, pulled down the zipper, and then pushed her pants down just past the bottom of her ass cheeks. He slipped a hand between her legs, cupping her mound and applying pressure. He rubbed slowly back and forth. On each stroke his hand pushed a little further between her legs.

“You are so fucking wet,” he growled into her mouth.

“I’ve been dripping since you opened the damn door,” she replied.

Michelle Graham has dreamed of being a writer since she was very young. Her stories almost always had a happy ending, and once she reached a certain age, they almost always had romance. Michelle loves to recreate that wonderful feeling of falling head over heels in love. The relationships she writes about are definitely not conventional, but the love is always the same.

Michelle has been in love with her wonderful husband for seventeen years, and they have two children, and a variety of animals. She lives in southern Ontario, Canada.

Where to Find Michelle Graham