← A peek behind the writing curtain
Mid Week Tease: Behind the Iron Cross #MidWeekTease #MWTease →

TWO TO TANGO on sale for 99¢ this week at Evernight 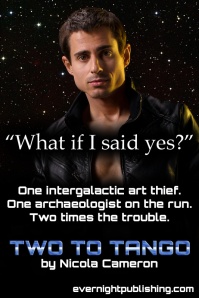 What? You mean you haven’t read my hilarious M/M SF caper novel Two to Tango yet? I’m…well, I’m crushed. But I’m also strong, so I will dab the tears from my damask cheeks and think about it all tomorrow at Tara.

Now that I’ve finished pretending to be Scarlett O’Hara, do I have a deal for you! For the next week Two to Tango is only 99 cents at Evernight Publishing. And if that isn’t enough to persuade you, here’s a little more about the story:

← A peek behind the writing curtain
Mid Week Tease: Behind the Iron Cross #MidWeekTease #MWTease →