← Writing During Tumultuous Times (or: Why I Didn’t Make Word Count Last Week)
Vote for King of Blades in the Swoon Awards semi-finals! →

Being an indie author isn’t all snacking on bon-bons and writing your heart out on your preferred choice of writing tech. You also have to do things like track your income, monitor your Amazon ads (I was doing absolutely splendidly up until yesterday, and then today––bubkes. I don’t know if it was because of the impeachment proceedings or not), write up and send out newsletters, study courses on how to promote your work more effectively, and a bunch of other paperwork things. Many years ago, Terry Pratchett once told me that only half of his day was actually taken up with writing––the other half was paperwork. Now I understand what he meant. 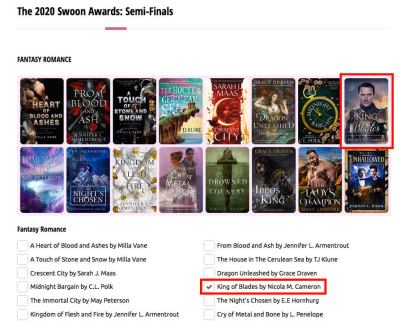 But at least the long-delayed newsletter with the links for Cross Current went out, plus I added info about King of Blades being up for a Swoon Award––

*sigh* I didn’t mention that here, did I? Yeah, KoB made it to the semi-finals in the Fantasy Romance category in the Swoonies, and if you’d like to vote for it you can do that here: bit.ly/3n6cYeh

I need a PA. Or the ability to go somewhere where five cats aren’t bugging me for attention.

Anyhoo, I also added a link to a survey in the newsletter so that people could tell me if they’re interested in my MM titles, my MF titles, or are willing to read it all. I’m trying to be more professional this year and target my newsletters more accurately so that people only get the info on titles that they want to read.

As for TCatB I haven’t hit word count yet for the day, but I’m hoping to get that done after dinner. I must say, it’s always nice when your Muse graces you with an infodump about your hero’s back story as she did this morning at 4:00 AM. So now it appears that I’m writing a book about a cheerfully pan Victorian vampiress who finds out she’s the mate of a big, hunky, virginal dragon shifter with amnesia.

I mean, yeah, there’s OTHER stuff in there, as well––the whole bit about finding a group of missing selkie girls who are being married against their will to wealthy merchants, for one. But Fee just can’t get over her craving for big, grumpy Callum Brown, professor of literature and dragon shifter who can’t remember anything from before the year 900 (when he was hit by lightning during a North Sea storm and a pod of selkies nursed him back to health. He’s been their protector ever since). Callum has waited almost a thousand years to find his mate, and now she’s finally walked into his life––except that Fyodora doesn’t DO lifelong commitments and refuses to be tied down.

I do like to complicate things. Now I just have to figure out how this is all going to work for them.

Posted on January 13, 2021, in fantasy, historical, King of Blades, Paranormal, Shifter, The Crimson and the Black. Bookmark the permalink. Comments Off on Publishing work, cats, and newsletters.

← Writing During Tumultuous Times (or: Why I Didn’t Make Word Count Last Week)
Vote for King of Blades in the Swoon Awards semi-finals! →