← Day Drinking Is Starting To Look More Attractive
Speeding along nicely, thank you →

The weather has cooperated with me for the last two days, allowing me to sit out on the patio and work without the J Crew demanding my attention. As a result, the first eight chapters (out of a projected total of 21) of Shadow of the Swan have now been retrofitted with the new plot.

I have to say, it flows SO much better this way, so clearly this was the right thing to do and I feel like I’m finally, finally on the right track. This revision also meant I got to add in Miss Pandora Philips, the granddaughter of a ministry official, in a place where she really needed to go and in a manner that endeared her to Louisa. I swear, this cast is growing on me SO much.

Still not turning it into a series, though, nope, no way, uh-uh … at least not until I get the Olympic Cove series finished, which should be sometime next year. 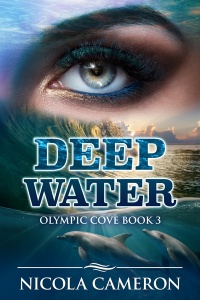 Speaking of the cove and its delightful denizens, I’m plowing ahead on the revisions for Deep Water (as I realized over last weekend that, no, my schedule was wrong, I can request the rights back next Monday instead of in December. D’oh), and I’ll get the cover done for that sometime this weekend. The graphic is left is pretty much the finished cover — I still need to do a few tweaks, make the text stand out a bit more against the background, but all in all I really like it. And since it’s the first of the OC books with an MMF (technically MFF if you include the original trio) menage, I figured I’d go with a feminine eye on the cover.

Believe it or not, I’ve also been plugging slowly away on Cross Current (OC 4), so if I can get a move on with that once Swan, King of Blades, and Uncertainty Principle are out, I should be able to have it ready by January, and the last other OC books (Landlocked and Undertow, respectively) fairly soon after that.

Then I’m done with my first series, and hopefully that will convince people who prefer to wait until a series is completely finished to buy it will do just that. Man, that sentence looks weird, but you know what I mean. After that, if Swan has enough buyers and interest, I’ll see about doing a sequel.

Posted on August 6, 2020, in Uncategorized. Bookmark the permalink. Comments Off on Frogging successfully completed.

← Day Drinking Is Starting To Look More Attractive
Speeding along nicely, thank you →