TGIF! Let’s kick off the weekend with Harley Wylde’s hot new MC romance Jackal, now available from Changeling Press and other online purveyors of fine romance. Take it away, Harley! 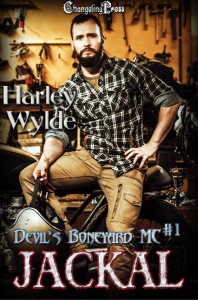 Josie: I spent an amazing three days with Jackal before he disappeared, back to his club, the Devil’s Boneyard. He’d made it clear what we had was a temporary thing — he never wanted the picket fence and kids. I was fine with that. Then I faced the scariest thing ever. Telling my big brother, Tank, a Dixie Reaper, I was pregnant and alone at the age of nineteen. He wanted to go after Jackal, but I wouldn’t let him. I wanted this baby, and I knew Jackal wouldn’t. I never expected to see him again. Funny how fate has a way of surprising you.

Jackal: I’ve thought about Josie often since I walked away from her over two years ago. When I’m finally back in Dixie Reapers territory, I knew I’d look her up, see if we could have some more fun. I never counted on the little girl glued to her hip, or the fact the kid was mine. So I did what I do best. I ran. But now I want something I’ve never wanted before. My family. Because Josie and our daughter, Allegra, are exactly what’s been missing in my life. I just have to do some groveling and hope she’ll forgive me. Easy, right? I’ve never had a woman tell me no.

Figures the one I want more than anything might be the first to send me packing. But when she gets an unexpected visitor who threatens her and our child, I’ll do whatever it takes to keep them safe. Now that I’m ready to keep my woman and kid, I’m not letting anyone take them away.

I frowned at Scratch. “What do you mean they want me out of here?”

Scratch rubbed his beard. “I didn’t ask questions, but I’d imagine it has something to do with you fucking Tank’s sister the last time you were here. You ran off with her for a few days and I don’t think that went over well with big brother.”

“Shit, Scratch! She’s a grown woman and can make her own decisions. If she has a complaint about our time together, I want to hear it from her.”

“Do you know where she lives?” I asked.

“I shouldn’t tell you,” Scratch said. “They don’t want you anywhere near her.”

He watched me for a moment, then nodded. “I heard she’s been living with Tank. Green two-story house about two miles down the road,” he said, nodding to the left of the compound. “But if Tank beats the shit out of you for going after his sister, you’re on your own. You’ve already been warned away.”

“I’m just going to talk to her. If she wants me to leave, then I will.”

“Don’t stir shit up, Jackal. I’ll send you packing and ask someone else to come help. You hear me?” Scratch asked.

I got on my bike and went in search of Tank’s house. The car parked in the driveway of the green house looked to be the same one that had been outside the clubhouse that night over two years ago. I killed the engine on my bike and walked up the porch steps, then knocked on the door. A slightly curvier Josie opened the door, her hair up in a messy bun, no make-up on her face, but fuck if she didn’t look gorgeous. Her hips seemed a little wider than before and her breasts looked bigger too. She damn near took my breath away, and I knew I was staring. There were dark circles under her eyes, and there was a yellow smear on her tank top, but I ached to reach for her.

Her eyes went wide and she stepped outside, pulling the door mostly shut behind her. She cast a nervous glance into the house before facing me again.

“What are you doing here, Jackal?”

“I came to help Zipper and I wanted to see you.”

She nervously looked over her shoulder again through the crack in the door, pulling it closed a little more before looking at me. Something was up, but I didn’t know what. I knew Tank wasn’t in there, so who was? Was there a guy in there she didn’t want me to see? I hadn’t really thought about her hooking up with someone while I was gone, but I should have. A beautiful redhead like Josie? She probably had men falling at her feet.

“Go, but… What’s going on, Josie? Are you pissed I didn’t call?” I glanced at the door, anger burning in my gut. “Is there someone else?”

“Please, Jackal. I can’t do this right now.”

She stepped back inside, careful that I wouldn’t see into the house, then shut the door. I heard the lock click and her footsteps wander away.

What the fuck was going on?

Harley is the bestselling author of the Dixie Reapers MC series. You can find her at harleywylde.com!