Behind the Iron Cross update and release date 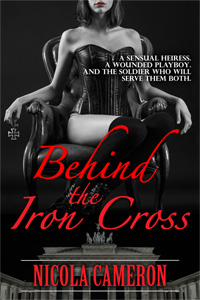 I’m currently on the home stretch with about 10K ahead of me for Behind the Iron Cross, my MMF historical romance set in between-the-wars Berlin. Which is good, because I have three betas who are threatening to camp out on my doorstep until I turn over the manuscript. It’s nice to be wanted.

That being said, this puppy is going to need a LOT of editing, partially because it’s been in progress since 2012 and partially because I need to doublecheck a lot of the historical bits. Also, I may be watching Babylon Berlin on Netflix for setting and costume inspiration (Babylon Berlin, by the way, is a FANTASTIC show and I highly recommend it if you like historically set police procedurals). With this in mind, I am formally setting the release date for BtIC as October 23, 2018. I know this may disappoint some people who were hoping to get it next week, but I’ve got to give the story the editing time it needs. Besides, you’ll be happier with the end result if I make sure it’s spandy clean and tight as a drum.

And after that, I immediately launch into King of Blades (Two Thrones 4). Because that is definitely my most popular series at the moment, and right now I really, really, REALLY want to get back to writing some fantasy. Soon, Hellas — soon.