← Another open letter to Jeff Bezos
I’m Still Here (oh, and please buy my books — I have an A/C repair to pay off) → 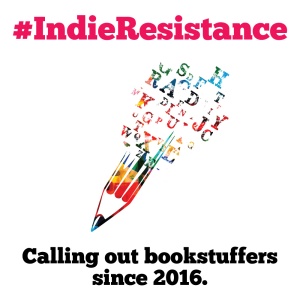 Well! Looks like there’s been a lot of positive reaction to #GETLOUD. Everyone who is supporting Suzan Tisdale, Heather C. Leigh, David Gaughran, Ivy Quinn, and the other authors on the front lines of this fight, you rock SO hard.

I’m a latecomer to this fight, BTW. Those people I mentioned above are the true leaders in this struggle. I’m just an indie author who’s trying to make an honest living slinging words. But when I see bookstuffers using loopholes to drain money out of KU, yeah, I’m pissed. And to the sock puppet accounts who are trying to debate real indie authors with some laughable tactics (logical rigor is not their strong suit) and generally stir up trouble — ain’t gonna work, pumpkins. We’re on to your tactics. So are readers. So is the media.

Although if I’m honest, I have to laugh — one sock puppet account called a debut author out for her comments on bookstuffers, saying that she knew nothing about the business. I replied that I’ve been in it for twenty-three years and the debut author was right. I got a snide response of, “Well, a lot of things have changed since 1995.” Actually, yes, they have, which is how we wound up in this current situation. But you know one thing that hasn’t changed since 1995? The drive to tell a good story. That’s what separates the writers from the packagers (if they’re so pissed off about being called bookstuffers). A writer is in this field because they want to tell stories. They want to entertain, enlighten, make people think. Whereas a bookstuffer wants to load as much ghostwritten material into a book as possible and siphon off as much money from readers as possible, often guilting them into being human click farms in the process. See the difference? Anyone who says, “Getting into the Amazon top 100 is expensive, but you can make money if you can do it” — folks, that’s not a writer. That’s an opportunist. It’s all about the money with them. They don’t care about entertaining you. They just want you to make it rain $ on them.

As I’ve said elsewhere, writers know that writing isn’t a way to get rich. It’s a way to do the thing you love, and hopefully make enough money to pay your bills. Sometimes, you get lucky and you make a bundle off your work. But believe me, that’s not common (Lord, I wish it was). Would I love to get rich off my work? Oh, hell yes. But if that ever happens (hey, Hollywood, I have a romcom that would make a GREAT movie), I can take pride in knowing that it happened because *I put in the work.* I busted my ass to become a good writer.

So, to bring this around, bookstuffers know that their cash cow is drying up, and they’re running scared and trying to stir up trouble to hide their tracks. That’s not going to work. Too many people know about their tactics, now. The balance is shifting. But as Bianca said, it’s going to take time to put things back on a level playing field. Hang in there. Tell Amazon to do the right thing. Keep supporting legitimate indie authors. Be excellent to each other. And stay awesome.

Posted on June 17, 2018, in Business of Writing, Writing. Bookmark the permalink. Comments Off on Bookstuffers, #IndieResistance, and #GETLOUD.

← Another open letter to Jeff Bezos
I’m Still Here (oh, and please buy my books — I have an A/C repair to pay off) →