← Some news on TO MY MUSE
I still get nervous →

Sick? I don’t have time to be sick. I have a book to edit. 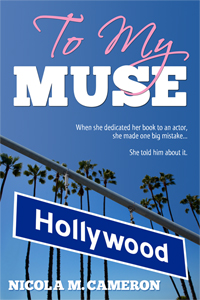 Bah. Virus, be gone. I have too much work to do.

So, To My Muse is off to the betas and editor, I have the media packet put together, it’s currently churning through Amazon for pre-order, and I’ll brave the Smashwords Meat Grinder tomorrow to get the doc ready for that so that I can collect all the non-Amazon buy links, put them in my media packet, and send that off to bloggers, reviewers, and other folks who might talk up my work.

This was … a scarily easy edit. I’m not sure if that’s good or not. As I explained to Ramón, editing is normally more like wringing each page until blood drips out of it and the words reluctantly fall in a pleasing order. For TMM, it was more like, “Oh, that’s funny … and that’s funny … hee!” There were definitely things that needed to be edited, but it wasn’t nearly as soul-wracking as it usually it. I don’t know if it’s because this is a standalone, a contemporary romance, or a romcom. Getting feedback from the betas and my editor will either reassure me that I didn’t do anything wrong, or explain gently but firmly that I was fooling myself about this story and there’s lots I need to fix. We’ll see.

But in the meantime, I think I’ve pretty much done everything I can apart from the Meat Grinder for promo prep. Part of me wants to go make jewelry. The other part wants to collapse in bed and watch RuPaul’s Drag Race. Decisions, decisions…

Posted on May 5, 2018, in Belaurient Publishing, contemporary, Romcom, To My Muse. Bookmark the permalink. 1 Comment.