Today’s Sunday Shoutout goes to London Saint James, whose new audiobook Forever & Always is now out. Take it away, London!

Hi! Thank you so much for having me on your blog today to chat about my brand new audiobook baby, Forever & Always. This is book two of my Two Hearts, One Soul Duet and continues where Always, book one left off, completing Winter (my heroines) story.

One of the things readers/listeners ask me quite often is where does the inspiration for my stories come from? My answer; from many things—dreams, music, art, conversations, places I’ve been, etc… But when it comes to this duet, my inspiration came from a question to myself after seeing a documentary about kids who clearly remembered events, people, and places they shouldn’t have known about and the belief of past lives.

What was the question(s) I asked myself?

What if there was such a thing as soul mates? One person you were meant to love? From there came, what if we met our soul mate, lost them, and found them again years later? Is soul transfer or reincarnation a possibility? Can love conquer death?

Now, it’s your turn to ponder. Is it possible? Do you believe in soul mates?

From international bestselling author London Saint James comes the final installment of Two Hearts, One Soul, a breathtaking story of two people who have always been connected, forever tied together by fate, by destiny, by unbreakable love.

With the media hell-bent on exposing Winter’s once private life, Cayden will do anything to protect her. But there’s more than just the voracious paparazzi conspiring against them.

Involved in an unprecedented web of strange events, and wound in a string of lies about to break with devastating consequences, Winter must battle ghosts from her past that threaten to harm the man she loves.

Faced with a choice she always knew would be inevitable, and a secret of her own, can the fairytale Winter’s been living with Cayden beat the odds of their reality and really come true?

Listen to a sample:

A breeze blew into the bedroom from the open balcony doors—crisp and clean. The details of winter lingered with just a hint of spring to come, giving the warm room a punch of coolness as early morning sun slanted across the foot of the bed, highlighting the sheets in disarray.

My gaze shifted over to Cayden, sitting at the writing desk, phone in hand, speaking to someone about his upcoming film shoot. When his current film was done, he would be heading to Vancouver.

Would I be going? I didn’t know.

Leaning my hip against the doorjamb of the bathroom, I watched him, how his body moved—the muscles that flexed in his arm when he picked up a script from the desk. He was quietly confident, his movements fluid. No doubt, Cayden was something to watch even in such mundane things.

Walking quietly out of the bathroom, I went to him, not wishing to disturb him, but desperately wanting to touch the man of my dreams. In many ways, he still seemed unreal to me, as if he were an optical phenomenon that could liquefy into hazy lines of heat and disappear.

With the phone to his ear, Cayden turned and looked at me, his sapphire gaze roaming from the hair piled in a messy bun atop my head, to my bubble-gum-pink-painted toenails before he smiled.

Reaching out, he pulled me onto his lap where I willingly went, and picked up a pen from beside my laptop. Then, he crooked his head, holding the handset to the cordless in place against his shoulder to free his other hand and took a hold of mine.

Curious, I wondered what he was up to.

Cayden turned my hand over, palm side up. Swiped his fingers softly over my palm once. Wrote, I Love U, boldly across it. And then he curled my fingers closed, securing the words tight within the palm of my hand before he moved his hands from mine and took hold of the handset again.

My heart, not to mention my body, felt as if it would explode from the joy those three little words inspired. But the fact he wrote them, tattooed them onto my skin, was simply the sweetest thing he could have done.

“Go ahead and e-mail it. I’ll take a look,” he said to the person on the other end of the phone.

There was a pause. A buzzing followed by another pause.

“Sure. Not a problem,” Cayden replied, motioning for me to get up.

When I did, he adjusted the hard, straight-backed desk chair as well himself, and patted his lap.

Wearing nothing but a towel, I straddled him, chest to chest, and placed my arms around his strong shoulders. “Good?” I mouthed.

He winked his approval.

I played with the ends of his hair, feeling the impressive bulge beneath his designer sweatpants jerk against my bare core.

Blood raced through my veins with a start.

“Yes,” Cayden said into the phone. “I’m planning on it, but we can talk about that later.”

There was another pause, more humming sounds, then one of his hands went to my backside and squeezed. “Okay, thanks,” Cayden said.

He hadn’t been talking to me, but to whoever was on the phone.

“I will. Enjoy your breakfast.” He punched the end button and placed the handset into the receiver on the desk.

“I didn’t mean to disturb your call. I realize it was business,” I said.

“You can ‘disturb’ me anytime, baby.” 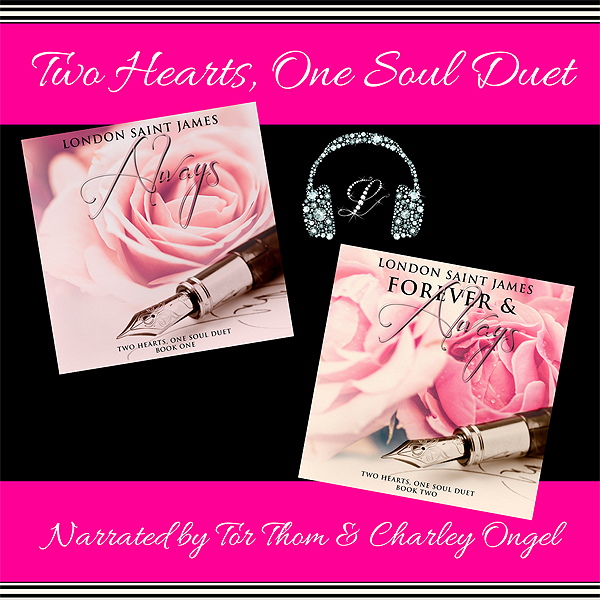 If you have had the pleasure of listening to any of Tor Thom and Charley Ongel’s auidobooks, you’ve probably said to yourself, “Wow, they really work well together.” Part of their great vocal chemistry is sheer talent, but the other part is most likely due to the fact they are together. Yep. Tor and Charley are happily married and have been narrating and producing audiobooks for the last year and a half, gathering hordes of fans. And, yes, I’m a fangirl of their work, too!

You can find out more here:

I live in the beautiful Smoky Mountains of Tennessee with a sexy, alpha-male hero of my very own and a spoiled, bossy fat cat. The stories I write have hot, protective men who love their women, and strong—even if they don’t realize they are strong—women who love and protect their men. The road to their Happily Ever Afters may not be easy, and they may have a little bit of angst, but they’ll get everything worked out, do a lot of kissing, and have some sizzling moments along the way.