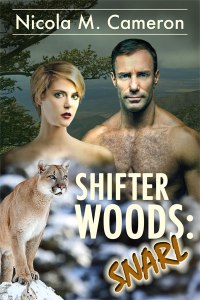 And then Jack made it unnecessary. The independent side of her bristled at him stepping in, but something very basic and female appreciated both the effort and his verbal support of her. “Let go of the gentleman, Mr. Hawthorne. I have this,” she said crisply.

As expected, the human straightened up and went directly into aggression mode. “Who the fuck do you think you are,” he yelled at Jack. “I’m gonna sue you for assault.”

“No, you’re not.” Kate stepped between them, giving the guest a flat, feline smile. “Because if you do, I’ll countersue for harassment, which our cameras captured,” she nodded at the unobtrusive camera mount in the ceiling. The man looked up at it and blanched. “And then I’ll make sure you’re barred from every ski resort in New Mexico. And believe me, I can.” She allowed her smile to widen. “So I suggest you go upstairs, get packed, and leave. We’ll reimburse you for the day’s room rental, of course.”

The human swallowed audibly, attention flickering between her and Jack. She could feel the wolf shifter standing just behind her, menace radiating over her shoulder. “Fine. Didn’t want to stay here, anyway,” he muttered, shuffling around them and through the bar’s double doors.

Kate let out a breath, then turned to Jack. “Thank you for that, but it wasn’t necessary.”

Unexpectedly he smiled at her. The expression lit his eyes, making them sparkle, and she couldn’t stop herself from smiling back. “I know, and I’m sorry if I overstepped,” he said, his voice a low rumble. “But you applying a beat down would’ve hit him on his male bump, and he would have sued just to soothe his ego. This way, he gets to think he was smart to leave, and you don’t have to worry about nuisance lawsuits.”

She felt a moment of surprise at the assessment, then wanted to laugh. Why the hell are you surprised? He’s a SEAL — threat assessment is what they’re good at. “I … see. Well, anything that makes my life easier is always appreciated.”

His smile warmed a few degrees. “I live to serve.”

And the flutter low in her belly was back. She couldn’t help imagining him naked and in her bed, all furry and hard and willing to serve— Jesus Haploid Christ, Chandler, get your mind out of the gutter. “Are you off now?”

“According to Wayne.” He looked abashed. “I came up here to drop off the stuff I found on the trails. I offered to go back and keep working, but—”

She wanted to smack herself. Every SEAL she’d ever met had insane levels of endurance when it came to physical labor, and clearly Hawthorne wanted to work. “That wasn’t a criticism,” she said quickly. “If you were heading back to the house, I was going to ask you to take out the sausage meat out of the freezer and let it thaw. I forgot to do it before I left this morning.”

“Oh. Yeah, I can do that.” He shoved his hands in his parka’s pockets. “Do you want me to do anything else?”

The need beneath the question, the drive to be active and useful, was something she understood perfectly. “We’ve got some wood behind the house that need splitting. Dad keeps meaning to get to it, but he’s been swamped these last few weeks. If you could get those chopped for the fireplace—”

His smile was back. “Be happy to. Where do you keep your ax?”

“In the shed behind the house. There’s a chainsaw there, too, if you want to cut the logs up for easier chopping.”

He snorted. “Where’s the fun in that?”

Kate shook her head. Yeah, he’s a SEAL. “You got your orders, specialist,” she said, allowing a hint of playfulness into her tone.

“Yes, ma’am.” Another arm twitch of a smothered salute and he headed off. She watched him go, wishing that his parka didn’t get in the way of watching what she suspected was a truly magnificent ass.