Thank you so much for hosting ARCTIC SPIRIT (Arctic Ice #1) on your blog. This story was previously published in an anthology and new details along with a hint at another new series set in the same world have been added. I have at least three books planned in each series. I have fallen so in love with my tigers and dragons and hope your readers will too. 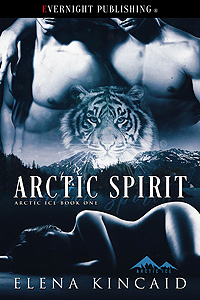 Charlotte Austen has been in love with her two best friends, Chris and Drew Malcom, since high school, but choosing between them was never an option. The day she said goodbye to them was a painful one, especially since she thought she would never see them again. Ten years and one visit later changes everything.

Alaskan tiger shifters, Chris and Drew, have never gotten over Charlotte. The fact that they were both in love with her was never the problem … being destined for a mate, however, was. They reach out to her, hoping to find a way to resume their friendship. The three of them get an unsuspected surprise when they see each other again.

The trio’s happy discovery does not come without a price. Jealousy and prejudice threaten to destroy the budding romance. Will Chris and Drew be able to stop the threat before they lose the love of their lives forever?

Drew pulled her to him and kissed her fiercely. She heard a low growl coming from the back of his throat and that only turned her on more. She had heard growls emanating from them before and quite a bit in the past two days, confusing them for simple male grunting sounds, but now she knew that the sound was a far more primal one. Soon after, his kiss turned playful, as he first licked the top of her lip and then nipped it. She moaned at the sensation and felt her nipples harden against his chest and her belly contracted with excitement, all modesty forgotten.

She had thought about what her first kiss would feel like with them, but her thoughts had paled in comparison with this reality. She moaned again, louder this time, when Drew pulled back slightly and cupped her breasts. Chris moved in closer from behind and began to gift her with kisses to the nape of her neck, gliding his hands up and down her sides.

Drew ended their kiss with another playful bite, but to her bottom lip this time. He exhaled loudly, while she tried to catch her breath. “You should get some more rest,” he said with regret.

“I have done nothing but sleep for the last two days.” Rest was the last thing she wanted right now. “Please don’t stop.”

“Mmm … I can smell her desire,” Chris said right before he tugged on her earlobe with his teeth.

Drew closed his eyes as he inhaled. “You smell delicious.”

“You can—” Charlotte did not have a chance to finish her sentence. Chris tilted her head to deliver another breath-stealing kiss, leaving his hand splayed right under her neck. Charlotte threw her arms up and over behind Chris’s neck.

Drew wasted no time in taking advantage of her inviting position. He cupped her breasts again before bringing them closer together and sucked hard on her nipples in turn. “You have such beautiful breasts,” he murmured against as he continued to lavish his attention on them.

Chris let loose another sexy growl as she tugged on his hair. He used his free hand to glide down her belly, moving the covers away from her body. She nearly convulsed when his fingers made contact with her soaking-wet pussy. She wanted his fingers inside her, but he only toyed with her at first, rubbing her lips, parting them, and then rubbing the wet flesh between. “I want a taste,” he said, cupping her firmly.

She let out an incoherent sound of agreement.

She complied, positioning herself on her back and then she boldly spread her legs in invitation. Chris moved between them. He massaged her breasts and then ran his hands down the length of her torso to her thighs as if his hands were memorizing her body. “You’re so fucking beautiful, Char.”

Drew lay down beside her. “Chris and I are going to acquaint ourselves with every beautiful inch of you, and then when you are ready, we are going to claim you, permanently.”

Elena Kincaid is an award-winning and Amazon best-selling author. She writes Paranormal and Contemporary Romances. She developed a passion for reading and writing at an early age, and loves to write what she loves to read, usually romance with a paranormal twist. Her desk is constantly cluttered with journals, sticky notes, and torn-out pieces of paper full of ideas.

She was born in Ukraine and raised in New York, where she currently lives with her daughter. She graduated college with a BFA in creative writing, and in addition to writing, she also started a graphic design business a few years after graduating. When not working, Elena loves to spend time with her family, travel the globe, curl up with a good book, and catch up on her soaps.