← I’m baaaaack
So, there’s a Tesla roadster on the way to Mars… →

Hello, lovelies! Here’s another snippet from my very first contemporary romcom, To My Muse. Lily and Tom are still in bed after their host mistakenly gives them one room, and some truth is about to surface. Heh, heh, heh… 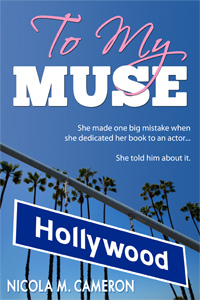 Tom sighed. “I’m hoping this doesn’t happen, but I feel I should warn you in case it does. Nathan might collar you at some point and give you a speech about not breaking my heart. If he does, just smile and agree with him.”

Ooookay. “Should I know the background for this?”

“Oh, hell. I suppose so.” He shifted onto his back, lacing his hands over his chest. “I told you we met during a run of Titus Andronicus, yes? At the time I was dating a woman named Cate. We’d been together for a year and were very serious about each other, or at least I thought so. She was everything I wanted in a partner—bright, funny, talented, incredibly empathetic. She worked with disabled children in North London and painted beautiful watercolors as a hobby. I was madly in love with her, and she said she loved me just as much.”

The romance writer part of my brain poked its nosy head over the parapet. “But something went wrong.”

There was a long pause. “You could say that,” he finally said. “I was planning on asking her to marry me after the run finished. The second-to-last weekend, there was a flood at the theater and we had to cancel the performance. I got back to our flat in time to catch her in bed with on of her colleagues.” He huffed out a soft, humorless laugh. “After he left she burst into tears and explained that he’d been going through a rough patch at work and she had only meant to comfort him, and somehow they’d fallen into bed together. And because I knew how kind and gentle she was, I believed her and wanted to beat the shit out of him.

“Until the next day, when he texted me. I still don’t know how he got my mobile number. He told me that they’d been having an affair for the last two months, and that he wanted to marry her. When I confronted Cate, she insisted he was lying, that he was obsessed with her and was clearly trying to break us up. And then he texted again and said they’d gone to Paris together not a month before, and sent pictures of them kissing in front of the bloody Eiffel Tower. She’d told me she was going to a teaching conference in Brighton that weekend.”

“Don’t be. As I soon found out, her colleague wasn’t the only man she’d been fucking that year, only the most recent.” He cleared his throat. “I’m not proud of this, but I got into her Facebook page. She used to use my laptop to check it sometimes, and she’d added the password to my browser. Sometimes I think she did that on purpose so that I’d find out.” I heard an audible swallow. “She’d been with at least five other men that year. There were pictures, love notes, everything. When I confronted her, she burst into tears and claimed that it was my fault, that I left her alone too much when I was in a play or doing telly work.”

“Oh, that’s bullshit,” I snapped. “If she wasn’t happy, she should have said something. Or pulled on her big girl panties and left. But fucking around behind your back is not cool.”

“I did point that out. She said that she couldn’t bear to leave me because it would be like abandoning a kitten on the high street.”

Ouch. Bitch certainly knew how to hit a guy where it hurt.

“After that, I was packed up and out of there within the hour,” Tom continued. “Luckily I ran into Nathan as I stormed down the street to the theater. He and Ana insisted that I stay with them until I could find another flat. They let me stay with them for months until I’d worked my way through everything.” Another soft breath. “We’ve been friends ever since. It’s why I want to give him this role. He’s done so much for me, and I want to do something for him, now that I have the chance.”

The pain in his voice pulled at me, and I wanted to hug him so badly. “Well, if it helps at all, I think you’re a good person,” I said instead. “Hollywood is so full of people all out for themselves. It’s nice to see someone who wants to do something nice for someone else for a change.”

“Yeah, it isn’t the easiest of cities. Or industries, for that matter. That’s one thing I don’t like about acting — the falseness of it all. Lying through perfect smiles, and complimenting people you hate, and shoveling so much horseshit just to get some work. If nothing else, Cate did me one favor by breaking up with me the way she did. She crystallized my hatred for dishonesty.”

I went very still at that. I was lying next to him thanks to a big fat lie. “Oh. Um, well, I can’t blame you,” I said in a small voice.

He snorted. “I must sound like the biggest hypocrite in the world right now, considering how you’ve wound up here. I’m sorry about that, Lily. I wouldn’t blame you if you wanted to leave in the morning.”

Great, more guilt. “I’m here because I want to be,” I said as firmly as I could. “You have an amazing property and I want to write the screenplay. And Cate was an idiot. You deserve better than that.”

A quiet sound, not quite a laugh. “That’s what Nathan and Ana said. I don’t suppose you’re single?”

That stopped me breathing for a moment.