TGIF! Let’s kick off the weekend with Ekaterine Xia’s hot new fantasy romance Goddess in Waiting, now available from Amazon and other purveyors of romance ebooks. Take it away, Ekaterine! 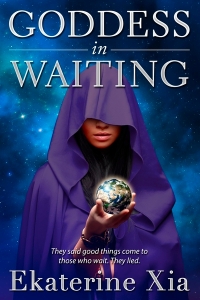 Amarantha, goddess of memory, is called to present Earth’s case before the Elder Council.

If she fails to persuade them that Earth is on track to Ascension, the planet will be reset back to prehistoric days.

And that’s the good ending.

The Devourer of Worlds looms in wait to claim Earth as his rightful salvage. Not content with the planet as a main course, he’s also set his eyes on having godlings as appetizers.

Since drama comes in threes, not only does Amarantha have the Council and the D to contend with, but she must also negotiate the status of her marriage with Death himself.

Can a goddess nearly Faded into mortal flesh save the world, herself, and her marriage along with it?

“There is a challenger. If we do not meet his challenge, then he lays claim to all of Earth as salvage. All of Earth, all of its inhabitants — devoured,” Ra said.

It was Alex who answered. “Failure to ascend before achievement of interstellar travel.”

I threw up my hands in disgust. “Of all the excuses. We are so far from interstellar travel it isn’t even funny.”

I gaped at Ra, who only shrugged, her answering grimace wry.

“Remember those alien ships that crashed a few decades ago? Well, they think they’re on the verge to cracking the riddle.”

They. The dancing monkeys that called themselves world leaders.

Exhaling a slow breath out, I pinched the point between my brows. “How close is on the verge?”

“It could be anything from decades to mere days. Breakthroughs are hard to predict.”

I slumped back into my seat, cuddled the amphora to my chest, and took a good long slurp. There really wasn’t enough booze there to make the situation even vaguely tenable, but no sense in heading into a quandary sober when I could do it somewhat sloshed. The wine was good. Very good. No wonder Alex drank the stuff like water.

A tipsy gurgle escaped. For all I knew, it had been water. That was one of Alex’s tricks, after all.

We drank silently and steadily for a while. To their credit, Alex and Ra didn’t push. Probably because they knew I was one word away from saying fuck it. They knew what happened the last time, what I’d lost.

We did end up breaking out the Ninety-nine and special potion Five after the sixth bathroom run. Having a super charged metabolism wasn’t all it was fired up to be when it meant that you spent more time running to the toilet than you did drunk.

I gave in when the sun started heading west. They weren’t going away and neither was the situation.

“All right. So tell me again: why me? I’m just a little, minor goddess out of mostly obscured Chinese legend with a specialty for memories. Eighteen Hells, most people don’t even know I’m a goddess or that I exist.”

I lifted my cup and pointed at Alexandros, continuing to grouse, “I can see why Mr. Sunnyface over there doesn’t want the job, but why not any of the numerous more well-known gods out there?”

At this point, Alex’s drinking problems aside, none of us wanted to give his worshipers the satisfaction of knowing that they were right about his existence. Including him. Not to mention that he already had more than enough on his plate to deal with all the problems his followers dreamed up on a daily basis. If we put more on his shoulders, he could very well decide that he was better off perpetually floating in a vat of wine rather than not. As it was, he was already close to being pickled. Even Dionysus couldn’t keep up, which was saying something.

Ra flicked me a look. “Most of ’em have gone the incarnation route. Or they’ve gone on walkaround.” Which you would know if you were paying any attention at all, her expression said.

I shrugged. That was something I had no guilt over. Why, when gods Fell, incarnated, Faded, and Slept on a whim? Who you had with you at any given time was who you had.

“But not all. I mean, if you’re scraping the barrel, you could consider Bast, Tiamat, or who’s that one with the gorgeous accent and the feathers?”

Alexandros raised his hand and started ticking down fingers. “Bast is currently Fallen as a cat who is pet to the principessa of some rich country. She’s hardly going to give up her foie gras and cream for this posting, even if we did manage to get through to her in her current form. Your hot stud with the gorgeous accent and feathers recently went on tour of another world to find more worshippers. And do we really need to bring up Tiamat? If we let Tiamat be the representative of Earth, we might as well let the challenger have it. It’ll be less embarrassing.”

I tsked at him. “Tiamat would be heartbroken to hear you say that about her.” True though. She was just a bit too closely allied with chaos for diplomacy. Not that we didn’t like Chaos and Entropy, but really, it would be like bringing your favorite rabid squirrel to a party and expecting things to not go sideways.

He arched a brow. “Tiamat can…”

“The buddhas have gone. Alex can’t and won’t do it. Fates and Stars, you don’t want Alex doing it because you don’t want to give his followers the chance to be smug. Anandi and I can’t do it because we have descendants and they don’t count us as impartial parties. Almost everyone else has incarnated or Fell. Tell me, Amarantha, who would you leave the future in the hands of right now?”

“Impartial? That’s a requirement now? And who on this blue earth is impartial?”

Alex gave me an oddly sweet smile, untainted by cynicism or bitterness. “It’s your choice, Amarantha. But I know you. You’ve already made it, haven’t you?”

I took a swig of special potion Five. It hit me like a ton of bricks, a warm sensation floating up from my abdomen, my memories blurring slightly, my emotions clouding just enough for me to say the fateful words.

“Fine. I’ll do it. What does it entail; where’s my entourage; how do I kill the big bad; and what’s the treasure?”

Traverser of realms, dreamer, dabbler in all things fantastical – Katje builds worlds where HEAs are possible for everyone.