Thank you for hosting me with new release MM romance Hidden Magic.

I had this story in my head for months before I started to write it. The elf, Owain Lovage, was so clear in my imagination but not his lover to be. Rowan kept disappearing and then reforming. I knew he had to be special because Owain is so sure he can never have a human partner.

Owain is lonely but he’s a happy soul, already in love with nature and as much as Rowan stirs him as they meet, Owain is calm and takes the love poured out to him from Rowan like gifts.

Rowan is highly sexual and used to taking what he needs from the men he meets. He pursues Owain from the start, but as soon as they connect, he’s lost in a pull of attraction he’s never felt before. He falls in love with Owain long before he knows it.

There’s a twist, as always, in my romances and of course a happy ending. I hope you enjoy the passion between these two men and the fun in the build to the end where I allow life to play tricks on them the way we all know it can. 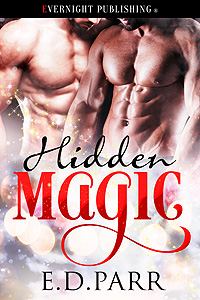 Owain Lovage belongs to an ancient family of elven beings, but he and all his family hide themselves among the ordinary humans of an English rural town, where Owain runs a reindeer farm and visitor center. Owain’s life is full, but he is lonely, yearning for a handsome, sexy man to love.

When Rowan Carter reluctantly leaves California to stay with his folks on vacation for the holiday season in England, everything is so much better than he expected—especially when he meets Owain. Captivated by Owain, Rowan seeks him out. Melting hot kisses in the snow are only the start of what he has in mind to do with this red-hot guy.

But Rowan is only on vacation, and his life in California is waiting. Is two weeks long enough to fall in love? And Owain’s secret, his elven identity, is a ticking time-bomb for their relationship. Does the answer lie in an ancient magic spell? Or are the two men doomed to miss the love they have begun?

“I should get home.” Owain closed the trunk and walked with Rowan to the cottage.

Rowan led the way down the hall and into the dining room where he placed the box he carried on a long table. “Why, Owain? Is someone there waiting for you? Do you have a boyfriend?” His cock still strained against his jeans, and he ached to hold Owain close. It was as if he’d already become addicted to the gorgeous man who glanced at him with his sexy dark eyes.

Without answering, Owain carefully placed the box of mistletoe on the table.

Rowan gazed at Owain. He had to know right then if this man was available. “Tell me.”

Owain’s eyes filled with what looked to Rowan like pleasure and amusement—a strange mix of emotions.

“I have no one waiting for me. I don’t have a boyfriend, lover, or partner. I have somewhere to be, though. There’s always a family gathering for Yule. People come from across the country. I always help plan it.” He smiled and touched Rowan’s arm. “We could meet tomorrow.”

The smile and suggestion sent waves of happiness over Rowan. “I’ll come out to the car with you. We’ll make arrangements.” He followed Owain to the driver’s side of the SUV.

Owain leaned against the door and held out his arms.

Rowan’s heart leapt as he saw the gesture. There was no one to see, and he surged into Owain’s arms, pushing his cock on Owain’s hard body. “You’ll never know how welcome this is, to press against you, to have you hold me. Owain, I want you so badly. I can’t believe it.” He murmured the words a breath away from Owain’s lips—then Owain kissed him. It was like falling into a soft, sexual haze that lifted him from his feet. His eyes closed, heavy with lust, and he grabbed Owain’s hips to thrust his lower body along Owain’s until with a groan he contacted the hard column of Owain’s cock. “You want me, too.”

Owain left his mouth as Rowan broke the kiss to breathe and speak. He nuzzled one of Rowan’s ears and whispered. “I’m fucking desperate.”

Rowan pushed his hand between them and pressed his palm on the shape of Owain’s erection.

Owain gently put him at arm’s length. “I’m the same, but I must go now. I work at the reindeer farm, that’s my place. In my jacket pocket there’s a business card. Come to see me any time tomorrow. I’ll show you around.” He brought out the card he’d referred to and held it out to Rowan.

Rowan took it. “I will.” He gazed at Owain. “I never expected to meet you.”

Owain leaned to his face and placed a soft, quick kiss on his mouth. “I’m glad you did.”