My cat has turned into Grandpa Simpson 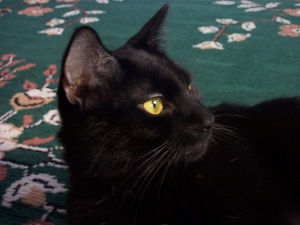 But since I know his kidneys are slowly failing I don’t want to ignore his yelling because I don’t know if it’s because he’s in pain or he’s just being grumpy. So, yeah, I’ve pretty much become his body servant. Cut to a few minutes ago, when he was yelling loudly from the living room. Like the good servant I am, I dropped what I was doing and went in there to see what was up.

Some background: JJ likes sleeping on the futon in the living room. I will occasionally bring him his wet food or water there so that he can have dinner in bed, so to speak. I’d left the spare water bowl on the end table, and because our orange tabby Jeremy is a huge resource hog who will shoulder JJ out of the way to get at any food or water I’d put another bowl of water next to it so that Jer-bear could drink out of that one while JJ drank out of the other bowl.

I go into the living room and see JJ staring at the now-empty water bowls. He then gives me an accusing look as if to say, “How dare you let these run dry?” Please note that we have two bowls of water with the regular food bowls and a big bowl of water on the breakfast nook table, all of which are washed and refreshed multiple times a day. But no, Grandpa wanted his water bowl on the end table, and he wanted it now.

I sighed and refilled them both. After a few minutes he yelled for cuddles, and has just now demanded to be let down. Once I did that he strolled off to the living room again, most likely to snooze until he decides to start yelling about something yet again.

My life, you know you want it.

Posted on May 19, 2017, in cats, Personal and tagged cats. Bookmark the permalink. Comments Off on My cat has turned into Grandpa Simpson.