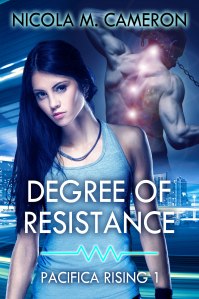 Degree of Resistance will be available at midnight tonight, which means everyone who pre-ordered a copy (*MWAH* I love you so much), you’ll immediately be able to jump into Evie and Ben’s story.

And I’m nervous. I know that sounds sort of ridiculous — this is my seventh novel, why am I nervous? I have no idea, I just am. I’m really pleased with it, and I kinda fell in love with these two so I want their story to do well. And since the sales for Palace of Scoundrels have been meh, I may be kind of worried that the success I had with Empress of Storms was a fluke and this one might tank as well. It’s a legitimate fear, after all.

Of course, when I mention this to various people they whap me around the head and tell me to stop being ridiculous, it’s a solid story that’s hitting in the middle of the android/cyborg/AI romance wave and people will like it (and if it sucked these folks would have sat me down for a come-to-Jesus talk). And I feel better for awhile.

And then, because my brain is paranoid and hates me, I think, “Well, shit, what if I offend Latinx with my portrayal of Evie? I grew up on the south side of Chicago with Mexican-American friends and neighbors, but that was decades ago. Eve and her family are on the West Coast — maybe I got language use wrong. Or cultural elements. And what about Song and her family? What did I screw up?”

To which my betas have pointed out that 1) this story takes place 31 years in the future, in a different country that’s only loosely based on the West Coast as it is now, and a lot of cultural stuff will have changed, plus none of the characters are cardboard cutouts put in simply to tick an ethnic box. Which is nice, but doesn’t mean that I didn’t foul up somewhere. I will say now that if I got something wrong, for the love of Kage Baker tell me so that I can learn from my mistakes and fix them in the next book.

So, yeah, Nic is perhaps a tad overwrought at the moment. This too shall pass and I’m sure I’ll feel much better in the morning, but for now don’t be surprised if you find me in a corner somewhere gibbering quietly to myself.

On the plus side, the DoR print books arrived this afternoon. Damn, CreateSpace, do you hire the Flash to deliver your stuff or what? So I am totally set for Wild Wicked Weekend.