← Happy Friday, and a snippet from Intersection
A Christmas Sale! →

The most wonderful time of the year?

When Jamison Pritchett is roped into replacing the mall photographer at Santa’s Village a week before Christmas, he’s certain he’ll be spending the holidays recovering from a nervous breakdown. A throng of sugar-frenzied kids might be enough to send this uptight photographer back into the darkroom permanently. Inappropriate thoughts about his far-too-attractive—and far-too-young—assistant aren’t helping fight that urge to hide, either.

For Noah Hawkins, adulting is a snap. Too bad relationships aren’t. With his business temporarily closed for repairs, he’s happy to help his sister out of a jam, even if the costume he’s given to wear borders on obscene. Constantly being mistaken for a teenager is no treat either, especially when he discovers his temporary new co-worker is sexy as hell and 15 years his senior.

Can Noah convince Jamison that age is just a number? Or will Jamison resist the gift Santa seems to be handing him on a platter?

“We’re closed,” he called out.

With the studio’s front shades drawn, he hadn’t noticed the other man’s approach. As he neared the door, however, he could see Noah’s unmistakable silhouette.

He opened the door. “What are you doing here?” He studied Noah’s face, trying desperately to remain impervious to his charm.

“Figured we needed to talk.” Noah brushed past Jamison and closed the door behind him.

“About what?” He fought the urge that rose up and told him to run his fingers across Noah’s chiseled jaw. “Shouldn’t you be packing for your trip?”

“Jamison. You should know better than to eavesdrop.” Noah’s tone was teasing but kind. “Or, at the very least, make sure you eavesdrop on the entire conversation.”

“I’m sorry. I mean he’s your ex. And you and I haven’t…” He trailed off, not quite sure how to finish his sentence.

“You and I might not have.” Noah pursed his lips and grinned around a half-eaten candy cane. “But that doesn’t change the fact that Travis is history. And I would imagine trolling the bars as we speak looking for someone willing to pay for his cruise.”

“Oh.” He would have been lying if he’d said he was sorry to hear it.

“So,” Noah drawled. “Just a kid, eh?” He leaned against Jamison’s desk, his lips wrapped invitingly around the minty candy.

Jamison felt himself flush. “Look, I’m sorry, okay. I didn’t mean anything by it. But let’s be real—you are significantly younger than me. And in that outfit they have you in, you barely look legal.”

“Good thing I am, then, isn’t it? It’d really suck for this—” Noah grabbed Jamison by the hips and devoured him in an absolutely soul-scorching kiss. “—to be something punishable by law, wouldn’t it?” he whispered against Jamison’s lips.

“I’m not so sure it shouldn’t be,” Jamison panted. The zing of mint from Noah’s kiss was electrifying. His heartbeat sped up as he watched the other man slowly slide the Christmas confection out of his mouth, tucking the dry end into his shirt pocket.

“Well if I’m going to be reprimanded, I’d better make it worth my while then.” Noah pulled him in for another kiss, his hands deftly untucking Jamison’s shirt. His hips rolled in a teasing rhythm against Jamison’s groin while he trailed his fingers southward.

Jamison was on fire. And when Noah reached for his belt, he sucked in a ragged breath.

“Wait—” He pulled back, lust and anxiety battling it out for control. “Someone could … the door.” He gestured toward the front of the studio.

Noah licked once more at his bottom lip, then sauntered over to the door and locked it. He double checked to make sure the blinds were completely shut.

“There. Now nobody will know we’re even here.” He headed back toward Jamison, his eyes full of promise.

“This is a bad idea. You know that, right?” Jamison was trying to convince himself more than anything. From the look on Noah’s face, he’d already made up his mind about what was going to happen.

And when Noah dropped to his knees with a dirty grin, Jamison knew too. 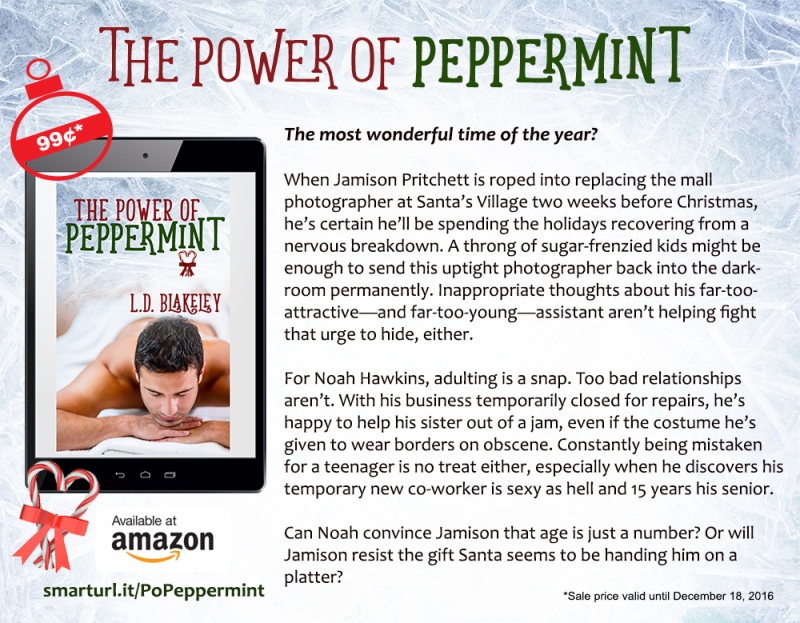 L.D. Blakeley is a pragmatist with a romantic soul & a dirty mind. She loves horror movies, hot sex, and happily ever afters. She’s easily distracted by shiny things, and is a slightly neurotic, highly ambitious dreamer who enjoys dabbling in photography & pretending she can carry a tune.

In another life, L.D. was a newspaper reporter, an entertainment & music writer, travel writer, website content editor, and a marketing shill. Now she prefers to spend her time writing hot, steamy fiction (with a healthy dose of romance) about intriguing, sexy men.  Although she dreams of living some place isolated with an endless supply of wine and an infinite number of titles on her eReader, she currently lives in downtown Toronto with her husband and their rock star cat.