Released as a part of Forbidden Love line from Torquere Press, Where the Heart Belongs tells the story of two brothers Zach and Drew with their unnatural relationship. When something terrible happens to Zach, an African American FBI Agent, Eugene Harris comes into the picture adding more complications. This is #1 of the Triangle Series. 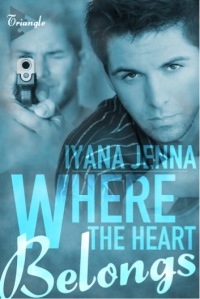 His brother slash boyfriend, Drew is leaving him. It makes Zach unaware of his surrounding and a hate-crime psycho takes him off guard. He is kidnapped and tortured. Zach is saved by the FBI and as a surviving witness, he is brought to stay with FBI Agent Eugene Harris.

Gradually, Eugene gets to know Zach. He should have been disgusted, but instead, all he wants is comfort Zach.

Will Zach accept that Drew is not coming back? Will Eugene finally have the gut to tell Zach how he feels

“Hush…” Zach whispered. He wanted to treasure the moment as much as he could but it was him who pulled back first. “Let’s go,” he said harshly. “You will miss your bus.” His heart bled at how Drew stared at him in confusion, hurt in his eyes. But he knew he had to let go now or he would never be able to.

He helped Drew with his bags and grasped Drew’s jacket sleeve, hugging him tight and kissing him again, not caring who might be watching. Drew clung onto him just like he used to during those cold nights whenever they were alone in a motel room, and squeezed him for the last time, pulling back. Their eyes met.

Long after the bus was gone, Zach was still standing at the bus station, his heart heavy. Drew was his brother and his lover. Zach realized the unnatural nature of their relationship, but he couldn’t bring himself to care. They only had each other in their lives.

Zach remembered one night. He had been nine at that time and Drew had been five. Rain had been pouring down the Earth for like hours now but there was no sign of stopping from the sound of it. Zach shot a wary gaze to the wide window and the thin lacy curtains covering it—a useless thing in his humble opinion—they could not stop him and Drew from staring right through the rain, let alone from the thunder and lightning that cracked almost every five minutes.

Alone only with little Drew in their small apartment—their father had yet to return, Zach did not dare shut his eyes even for a second. Not in this weather. Not when closing his eyes meant letting Drew out of his sight, although the kid was curled up right here with him, never far from his embrace.

I’m Iyana Jenna and you can call me Iyana. I like writing, romance, and man love so as you can see on this site, you’re mostly going to find m/m stories whether they are for adults or young adults. They are not going to be too heavy on explicit sex, though, as many say that my stories are considered sweet romance.