Let’s kick off this lovely October weekend with Piper Kay and book two in her Invicta series, Invicta Sanctuary from Hot Ink Press. 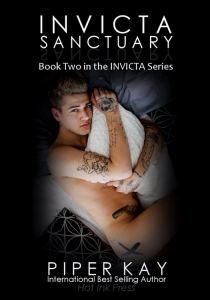 What is your sanctuary? For Mickey, he never needed one, he was his own. Until now. In a situation spinning out of control, Mickey is forced to make a move and he’s not sure how to handle it. He’s an intelligent, self-reliant man who never depended on anyone for anything, but now he is alone for the first time in his life, scared. By accident, he ends up at Invicta, the hottest new male go-go dance club in town. Owners, Kade and Holt, know the behavior all too well, but Mickey’s trust factor is leveling out on zero, until he spots Toryn. Sometimes sanctuary can be found in the strangest of places.

That young, dark haired, and tatted up hottie grabs me right off the bat. He can’t be more than twenty-four tops. Just right. He’s been poured into those leathers, his ass packed in nice and tight. Firm. They might as well have wrapped the man in saran wrap, not that I’d complain either way. He’s finally announced, but it’s probably a stage name he uses. Who even cares? As long as he keeps shaking himself around, I’m all good. The man rocks to the beat of the music. He pops that majestic ass in perfect tune with the thumps blasting from the speakers. Done like a true power bottom and personally, I’m enjoying the hell out of it. His hips begin to roll in a perfect circle, as he pivots on one foot to his side. He coils himself all the way around twice before facing the front. I’m loving his body movements. Someone stick a fork in me, because I’m sizzling… I think I may have just fallen in love with the man on the stage and those ‘fuck me hard’ hip moves.

Piper Kay is a homegrown country girl straight from the outskirts of Houston, Texas, USA. She is a #1 International Best Selling author of LGBT Erotica, and an International Bestselling author of LGBT Erotica romance, gay romance, specifically in the male/male (m/m) erotica genre, and LGBT drama. Piper is bringing her passion of storytelling straight to the pages, most times served with a super-sized sprinkle of sexy, a slice of sarcasm and a carafe of crazy.

Where to find Piper Kay