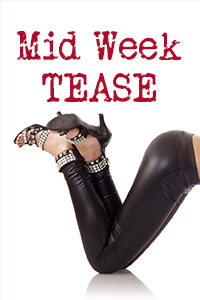 Happy Hump Day! Yes, I’m finally taking a crack at Evernight’s Planet Alpha series, so here’s a scene from the WIP (unedited, so be warned).

While on patrol, UN Security Forces Sergeant Deacon Shea is ambushed by scavengers and forced to hike back to civilization in the middle of a severe thunderstorm. When he runs across an Alphan ship grounded in a clearing, he thinks he’s saved. Little does he know that his life is about to become very, very complicated…

Deacon lurched back as the airlock hatch irised open. Inside was a huge, golden Alphan warrior in a sleek uniform. The alien towered over him by a good six inches, and a pair of pointed black horns on his forehead added another inch of height. Dark blue eyes twinkled at him, although the alien’s expression was solemn.

His gaze drifted downward to the thickly muscled body straining at the seams of its uniform. While he was in good shape, he suspected that the gold-skinned male in front of him could crush him like a bug.

Or throw you down and fuck you silly drifted through his head.

“What do you want, human?” the Alphan said, not unkindly.

He came to attention. “Sir, I’m Sergeant Deacon Shea, United Nations Security Forces,” he said, saluting. “My patrol partner and I were attacked by scavengers. They killed him, and my floater was destroyed. I need to contact my base and let them know what happened.” He grimaced. “And, um, a ride would be good, too.”

The Alphan glanced out at the woods then nodded, stepping back and gesturing him into the ship. Deacon stumbled into the airlock, smothering a moan as the warm air hit his cold, wet skin. “Thank you, sir.”

“Well, well,” another voice purred. “As the humans would say, look what the cat dragged in.”

Deacon turned, staring at the speaker. Unlike the Alphan, this alien had no black horns or golden skin. His eyes were pure, glittering black, and his long curling hair was the same color. If his changing skin color didn’t identify him, the gems embedded into his chest and the sheathed knives strapped to his thighs would have made his species quite clear.

Xyran. Deacon glanced at the Alphan, who looked at ease. “Sir, thank you for your assistance,” he said, trying to layer his tone with do you need help without making it too obvious. “If there’s anything I can do—”

The Xyran laughed. “I do believe this ridiculous human thinks I’ve kidnapped you, Taric.”

The Alphan — Taric — winced slightly. “Sergeant Shea, I am Captain Taric of Vordan Command, Alphan Expeditionary Force,” he said, giving Deacon a formal nod. “And this is Zhan. As you can see, he’s a Xyran. He collects useful information for me.”

The Xyran pursed his lips. “Yes, I’m useful in so many ways.”

Taric gave him an odd look, then turned back to Deacon. “I’m afraid communications are very patchy due to this storm, sergeant, but as soon as it dissipates I’ll take you back to your base.”

“Oh. Uh, thank you, sir.” Deacon shivered, acutely aware he was dripping water onto the polished deck. “Um, do you by any chance happen to have some towels on board? Or a blanket?”

“I believe we can find something appropriate.” With another one of those odd looks to the Xyran, Taric gestured for him to follow and headed down a narrow corridor towards the back of the craft. The corridor opened up into what Deacon assumed was a passenger area. Instead of seats, however, there were large pads in one corner piled high with cushions and blankets. “I’m afraid I don’t have any spare uniforms, and to be honest I doubt they’d fit you anyway.” The Alphan studied Deacon’s body frankly. “Do you have body taboos?”

Five years in the military had gotten rid of any modesty he’d ever possessed. But he got the sneaking feeling that the big, handsome alien wasn’t just sizing him up for a uniform. He remembered his xenorelations class, and how two Alphan males would become bondmates in order to take a female mate. Did bondmates fuck? Some of them had to, right?

With a start, he remembered Taric was waiting for his reply. “Body taboos. Uh, no, sir.” Feeling brave, he added, “But I’d feel a little stupid if I was the only one naked here.”

Taric smiled. “You have a point. Strip off that uniform.” He gestured at a small door in the corridor. “The cleansing unit is in there. Hang your clothes in the stall and the water reclaimer should have them dry before long.”

Deacon ducked into the small room, eying the oddly shaped but still recognizable toilet. Thank God for compatible anatomy. He stripped out of the wet uniform and hung it on the grab bars lining the tiny shower stall, tossing his t-shirt and briefs over the metal screen that separated the stall from the rest of the room.

The warm air felt good on his damp skin and he looked around for the alien equivalent of a towel. Nothing. Frowning, he opened the door and stuck his head out. “Sir—“

The rest of the question stuttered to a halt as he stared at a completely nude Alphan warrior.