← Wicked Wednesday Reads: Welcome Aboard
And it’s off! →

Thanks for having me on your blog today! I’m super excited to have the chance to share my latest story and first foray into the sci-fi romance genre, Burn With Me. As many of my stories, the creation of the Sun Whisperers came about during a bout of insomnia, my muse keeping me awake with her ramblings. (She does that a lot). Draco Taralundar was born, a lonely, fiery angel as old as the universe, finding salvation on a somewhat primitive planet as he fights to make sense of his place in the grand scheme of things. Burn With Me is the first in what I hope to be a trilogy, so enjoy! (I have to get busy on the next one…) 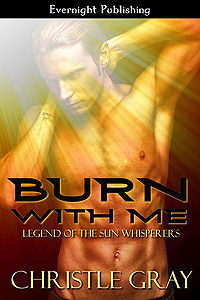 Maddelyn Sowers and her niece, Serra, struggle daily to survive. Their once beautiful home has been devastated by a race of alien warriors called the Raknorg, who have stripped the planet of its resources, and unleashed a deadly sickness that is slowly killing the population. Inexplicably immune from the disease, Maddelyn has witnessed her family members and friends die, young Serra next on the disease’s list.

Their world is shaken even further when a mysterious stranger literally falls from the sky one night. Though his presence puts them in danger, Maddelyn can’t refuse the plea for help in his golden eyes. Draco Taralundar claims to be a Sun Whisperer, the last of an ancient race descended from the sun. Maddelyn has difficulty reconciling the handsome man with the fantastic tales of her youth, but his capacity for healing and wielding the powers of fire are hard to ignore, renewing her hope for the first time in years. But will the fire that burns deep within his soul save what’s left of her heart, or consume them both?

Draco’s voice vibrated his chest against her cheek. Again, she was sure she hadn’t spoken aloud. But that thought melted away as his warmth around her chased away the nightmare and some of her pain. He promised to be her protector. Her guardian. Her angel.

Awareness of his smooth skin against her cheek faintly crept into her thoughts.  Maddelyn brought her hand up and rested it on his chest. The muscles flexed under her touch, his arms tightened around her protectively. He was so warm. So alive. It was almost enough for her to forget the despair that had engulfed her life. Maybe even more than almost.

Heat rolled off him in waves and seeped into her body. The warmth spread through her veins and sped up her heart as it banished the numbness, pulling her far away from the black beast that threatened to devour her in her grief. So much of her life had turned into protecting herself and her family, she’d almost forgotten what it was like to feel connected to someone. How letting someone into your heart might actually help it repair itself.

Maddelyn rubbed her cheek against his iron-solid chest like a cat, inhaling his scent.  Sunshine. He smelled like sunshine on a summer day as it bathed her and the flowers that used to bloom in the park in its light. Sunshine mixed with the muskiness of man.

Draco’s breathing accelerated, his heart beating wildly under her cheek. Her lips lightly grazed his collar bone and he stilled, his arms going rigid around her.

“Maddelyn.”  His voice had turned husky with need, but still contained an edge of wariness.

Maddelyn wasn’t entirely sure of what she was doing, but she let her brain take a back seat as her body responded to Draco. All she knew was that his touch and his warmth helped her forget everything else. There was no death. No Raknorg. No sadness. Only him. Only her. Only this.

“Please, Draco,” she whispered against his neck. I just want to forget. Please make me forget. She hoped her simple plea would convey the words that flashed inside her brain, but could not be said aloud. It might not last, but any reprieve from this hell would be a welcome one. Pulling someone close as a way to deal with loss. She’d seen it before. Watched as people clung to each other in the face of so much death, desperate to feel alive and chase away the loneliness that would consume their souls.

She tilted her head to gaze into his eyes. A faint glow pulsed in the tawny depths, yet his brow creased with uncertainty. He brought his hand up and cradled her cheek, lightly tracing her jaw line with his thumb. Just his touch did wonders to ease the ache in her heart.

Christle Gray was born and raised in Ohio, but lives in Kentucky with her husband and one frisky black cat. She’s a Gemini, which means she’s of two minds about everything, and has more projects in progress than she can ever hope to complete in one lifetime. Her interests vary as widely as her opinions, and she’s in no short supply of either. Just go ahead and ask. One of the many voices yammering on in her head is bound to answer.

Where to find Christle Gray